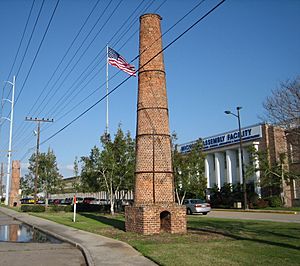 Old plantation smokestacks stand outside one of the buildings of NASA's Michoud Assembly Facility.

In the 19th century Michoud was a small rural village in Orleans Parish outside of the city limits on Gentilly Road. Before the American Civil War a sugar plantation and refinery was located here; the old brick smokestacks still remain as an area landmark beside Gentilly Road. After the construction of the Gulf Intracoastal Waterway some industrial development of the area began, growing with military plants during World War II, most importantly Higgins Industries factories. A small military airfield was here in the 1940s and 1950s [1].

Today Michoud is best known as the location of NASA's Michoud Assembly Facility. This area has the distinction of being the fastest-sinking part of Louisiana, and one of the fastest-sinking areas of the Gulf Region. It is also among the lowest areas in the city, in terms of elevation.

All content from Kiddle encyclopedia articles (including the article images and facts) can be freely used under Attribution-ShareAlike license, unless stated otherwise. Cite this article:
Michoud, New Orleans Facts for Kids. Kiddle Encyclopedia.