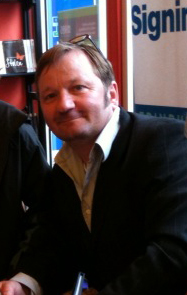 Mick Manning at a signing session at Edinburgh Book festival

Mick Manning (born 1959) is a British artist and creator of children's books.

Manning was raised in Haworth, near Keighley, Yorkshire, England. He first attended Bradford College, then studied graphic design at the University of Northumbria and later Natural History Illustration at the Royal College of Art, where his tutors included John Norris Wood, Quentin Blake, and Sheila Robinson. In 1990 he devised and ran the BA honours Illustration option at the Glasgow School of Art as Course Leader. As an artist Manning is represented by Godfrey & Watt, and St Judes. Manning is a Fellow of the English Association. and in 2015, was awarded an Honorary Fellowship by Bradford College.

Manning is best known for his long-term collaboration as a writer and co-illustrator with his partner the illustrator and painter Brita Granström. In 1998, The Scotsman newspaper wrote, "Mick Manning and Brita Granström's approach to non-fiction for younger children has revolutionised our bookshelves."

Manning and illustrator Brita Granström began making children's books together in 1993. Their first combined effort (The World Is Full of Babies) won the Smarties Silver Prize (years 0-5) in 1996.

The duo's book How Did I Begin was part of a controversy in 2011 when some segments of English society objected to literature aimed at pre-school children which included explicit explanations of how human conception occurs.

All content from Kiddle encyclopedia articles (including the article images and facts) can be freely used under Attribution-ShareAlike license, unless stated otherwise. Cite this article:
Mick Manning Facts for Kids. Kiddle Encyclopedia.