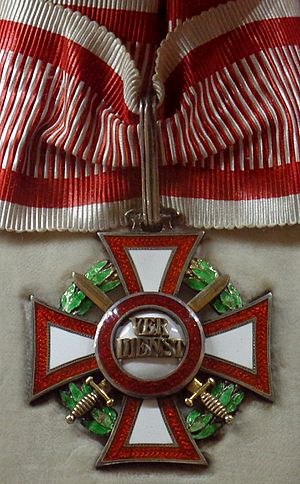 The Military Merit Cross (German: Militärverdienstkreuz, Croatian: Vojni križ za zasluge) was a decoration of the Empire of Austria and, after the establishment of the Dual Monarchy in 1867, the Empire of Austria-Hungary. It was first established on 22 October 1849 and underwent several revisions to its design and award criteria over the years of its existence. It became obsolete in 1918 with the fall of the Austro-Hungarian Empire.

All content from Kiddle encyclopedia articles (including the article images and facts) can be freely used under Attribution-ShareAlike license, unless stated otherwise. Cite this article:
Military Merit Cross (Austria–Hungary) Facts for Kids. Kiddle Encyclopedia.