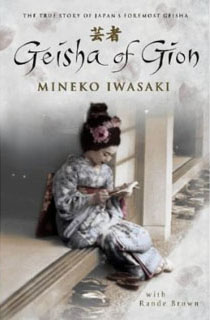 Geisha of Gion, Mineko Iwasaki's autobiography was an international bestseller. The photo depicts Iwasaki at the age of 23, outside the Gion Kobu Kaburenjo Theater in between performances.

Mineko Iwasaki (岩崎峰子, Iwasaki Mineko), born Masako Tanaka on November 2 1949 in Kyoto, was Japan's number one geiko (geisha) until she retired at the age of 29. She entertained many important people when they visited Japan, like Queen Elizabeth and Prince Charles. She retired because she was tired of the profession, and wanted to start a family.

Author Arthur Golden did an interview to her and used her as inspiration for his book Memoirs of a Geisha, that was later made a movie. Iwasaki later said that the book was full of lies, and that nothing that Golden said ever happened to her. She put a lawsuit against Golden for this, and they solved it out of court in 2003. After the publication of Memoirs of a Geisha, Iwasaki wrote her autobiography, Geisha, A Life.

All content from Kiddle encyclopedia articles (including the article images and facts) can be freely used under Attribution-ShareAlike license, unless stated otherwise. Cite this article:
Mineko Iwasaki Facts for Kids. Kiddle Encyclopedia.