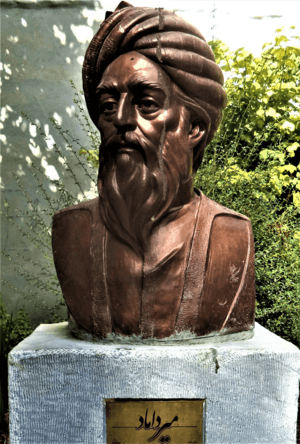 This page is about the philosopher. For the boulevard in Tehran, see Mirdamad Boulevard.

Mir Damad (Persian: ميرداماد) (d. 1631 or 1632), known also as Mir Mohammad Baqer Esterabadi, or Asterabadi, was a Twelver Shia Iranian philosopher in the Neoplatonizing Islamic Peripatetic traditions of Avicenna. He also was a Suhrawardi, a scholar of the traditional Islamic sciences, and foremost figure (together with his student Mulla Sadra) of the cultural renaissance of Iran undertaken under the Safavid dynasty. He was also the central founder of the School of Isfahan, noted by his students and admirers as the Third Teacher (mu'alim al-thalith) after Aristotle and al-Farabi.

The man has not been seen:

His daughter is the wife of Sayyid Ahmad ibn Zayn al-Abidin Alavi.

All content from Kiddle encyclopedia articles (including the article images and facts) can be freely used under Attribution-ShareAlike license, unless stated otherwise. Cite this article:
Mir Damad Facts for Kids. Kiddle Encyclopedia.