Kids Encyclopedia Facts
This page is about the philosophical position and movement. For other uses, see Rationalism (disambiguation). 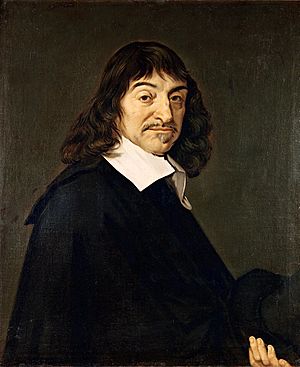 Rationalism is the view that reasoning by itself is a source of knowledge or proof. It is a philosophical movement that began in the 17th century, but the same ideas were also talked about before then. Rationalist philosophers believe that all knowledge can be understood through a process of reasoning, without any external sources. They do not believe that human beings can understand everything this way, but that it is theoretically possible. Rationalist philosophers attempt to understand ideas like God and the soul in this manner.

The first people to talk about rationalism were Marin Mersenne and René Descartes, in the 17th and 18th centuries. Other philosophers who are seen as rationalist today include Baruch Spinoza, Gottfried Leibniz and Immanuel Kant. Famous people opposed to this idea were David Hume and John Locke.

Rationalism also influenced natural law. Natural law is a theory that says that there are laws given by nature, valid everywhere. Deism was also influenced by rationalism. According to deism, a supreme being created the universe. This being, and other religious truths can be determined by observing nature, and finding natural laws. This would make religions that are based on revelation unnecessary.

All content from Kiddle encyclopedia articles (including the article images and facts) can be freely used under Attribution-ShareAlike license, unless stated otherwise. Cite this article:
Rationalism Facts for Kids. Kiddle Encyclopedia.