Missulena bradleyi, also known as the eastern mouse spider, is a species of spider belonging to the family Actinopodidae. The spider is endemic to the eastern coast of Australia.

William Joseph Rainbow described the eastern mouse spider in 1914 from a specimen collected in North Sydney by Henry Horton Burton Bradley (1845–1918), president of the board of trustees of the Australian Museum at the time. Describing the "beautiful and strikingly marked" specimen as a "decided novelty", Rainbow named it in honour of its collector, whom he stated was the first collector of Australian spiders. 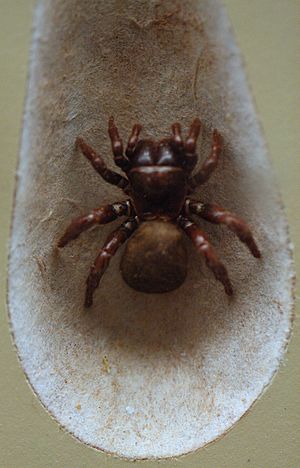 The male, which has an all-black carapace and a pale bluish area on top of the abdomen, roams around in autumn and early winter looking for a mate. They sometimes fall into swimming pools when wandering. Cases of envenomations have peaked during this period.

The burrow can be found by brushing away loose soil in an area where they live until a flap of silk indicative of the entrance is found. 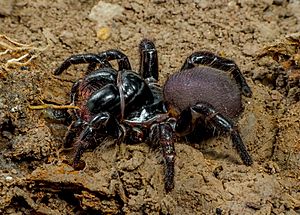 All content from Kiddle encyclopedia articles (including the article images and facts) can be freely used under Attribution-ShareAlike license, unless stated otherwise. Cite this article:
Missulena bradleyi Facts for Kids. Kiddle Encyclopedia.