Mitsubishi Model A facts for kids 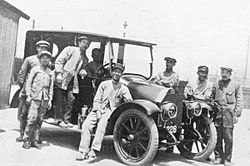 Mitsubishi Model A and workers (1917)

The Mitsubishi Model A is the only car built by the Mitsubishi Shipbuilding Company, a member of the Mitsubishi keiretsu which would later become Mitsubishi Motors, and the first automobile made in Japan. Based on the Fiat Tipo 3, it was a four-door seven-seat sedan powered by a front-mounted 26kW 2.8 litre straight-4 engine driving the rear wheels, and could drive as fast as 20 mph. 22 were built at the company's Kobe shipyard between 1917 and 1921.

All content from Kiddle encyclopedia articles (including the article images and facts) can be freely used under Attribution-ShareAlike license, unless stated otherwise. Cite this article:
Mitsubishi Model A Facts for Kids. Kiddle Encyclopedia.