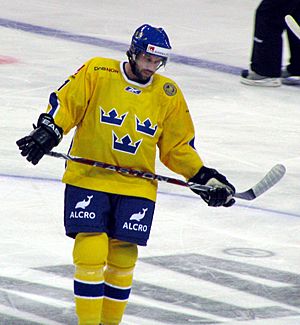 Modo Hockey is an ice hockey club in the town of Örnsköldsvik in Sweden. The club was established in 1921 as Alfredshems IK before becoming Modo AIK in 1963 and Modo HK (or Modo Hockey) in 1987.

All content from Kiddle encyclopedia articles (including the article images and facts) can be freely used under Attribution-ShareAlike license, unless stated otherwise. Cite this article:
Modo Hockey Facts for Kids. Kiddle Encyclopedia.