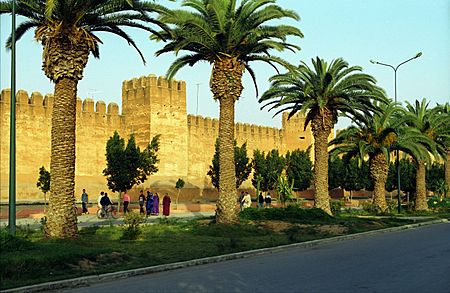 Mohammed ash-Sheikh initially had his capital in the southern Moroccan city of Taroudannt, the walls of which he built. The capital was then moved to Marrakesh after its conquest in 1524.

Mawlay Mohammed al-Shaykh al-Sharif al-Hassani al-Drawi al-Tagmaderti (Arabic: محمد الشيخ الشريف الحسني الدرعاوي التاكمادرتي‎code: ar is deprecated ) known as Mohammed al-Shaykh (محمد الشيخ) (1490/1491 – 23 October 1557) was the first sultan of the Saadi dynasty of Morocco (1544–57). He was particularly successful in expelling the Portuguese from most of their bases in Morocco. He also eliminated the Wattasids and resisted the Ottomans, thereby establishing a complete rule over Morocco.

War against the Portuguese

After the death of his father Abu Abdallah al-Qaim in 1517, Mohammed ash-Sheikh (together with his brother Ahmad al-Araj) took command of the war of the Saadi against the Portuguese. They conquered Marrakesh in 1524.

Ahmad al-Araj became Emir of Marrakesh, while still recognizing the Wattasid Sultan of Fez, while Mohammed ash-Sheikh remained as ruler of Taroudannt.

In 1527, the Treaty of Tadla was passed between the Saadians and the Wattasids, following the Wattasid defeat in the battle of Wadi al-Abid. Both dynasties agreed to their dominion on respective territories, separated by Tadla.

After 1536, and the rise in power of Araj, the brothers came into conflict with each other. Ahmad al-Araj had in effect allied himself with the Wattasids under regent Ali Abu Hassun (1524–54). Mohammed ash-Sheikh could maintain his position in Southern Morocco and conquered Agadir in 1541 and other coastal towns, ousting the Portuguese. After the loss of Agadir, the Portuguese immediately evacuated Azamor (1513–41) and Safi (1488–1541).

War against the Wattasids and Ottomans

After reorganising his army after Ottoman example he succeeded in conquering Fez in 1549, causing the downfall of the Wattasids. In the conquest of Fez he again used European artillery, which he had also used in the Fall of Agadir in 1541. He then provided an army to his son, who was able to conquer Tlemcen in 1549, and throw out the Zayyanid Sultan of Tlemcen.

With help of the Ottomans, the Wattasids under Ali Abu Hassun were able to conquer Fez once more in early 1554, but that conquest was short-lived, and Mohammed ash-Sheik was able to vanquish the last Wattasids at the Battle of Tadla, and recapture the city of Fez in September 1554. During the Ottoman Siege of Oran (1556), Mohammed ash-Sheikh, who was allied with the Spanish, managed to capture Tlemcen from the Ottomans. With the final victory of the Saadi and the death of Ali Abu Hassun in 1554, the war was decided.

Mohammed ash-Sheikh was assassinated by the Ottomans in 1557 by order of Hasan Pasha, son of Barbarossa, as he was preparing for an alliance with Spain against the Ottomans. Some Ottoman soldiers had falsely entered into his service, claiming to be deserters, and later assassinated him. He was buried in the Saadian Tombs of Marrakech. He was succeeded by his son Abdallah al-Ghalib.

All content from Kiddle encyclopedia articles (including the article images and facts) can be freely used under Attribution-ShareAlike license, unless stated otherwise. Cite this article:
Mohammed al-Shaykh Facts for Kids. Kiddle Encyclopedia.