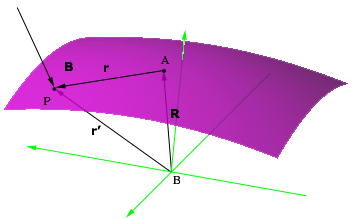 In physics, moment of force (often just moment) is a measure of its tendency to cause a body to rotate about a specific point or axis.

In this concept the moment arm, the distance from the axis of rotation, plays an important role. The lever, pulley, gear, and most other simple machines create mechanical advantage by changing the moment arm. The SI unit for moment is the newton meter (Nm).

Some examples where moments (turning effect) are applied are in the use of levers. These examples are: Seesaw, opening and closing of doors, nutcracker, can opener, crowbar,etc.

In physics , moment is a combination of a physical quantity and a distance.

The principle of moments is derived from Archimedes' discovery of the operating principle of the lever. In the lever one applies a force, in his day most often human muscle, to an arm, a beam of some sort. Archimedes noted that the amount of force applied to the object, the moment of force, is defined as M = rF, where F is the applied force, and r is the distance from the applied force to object.

All content from Kiddle encyclopedia articles (including the article images and facts) can be freely used under Attribution-ShareAlike license, unless stated otherwise. Cite this article:
Moment (physics) Facts for Kids. Kiddle Encyclopedia.