Conservationists promote habitat conservation by identifying trees that are necessary for roosting. They suggest that roosting sites be identified and designed to prevent degradation of the area. They also suggest that an environmental impact statement be filed when construction is done near overwintering roasts. Removal of trees within the perimeter of the habitat should be prohibited. Tree maintenance should be performed by experts in the field. They propose that it should be unlawful to remove trees, under-story plants and vegetation near roosting sites. Reforestation efforts should be instituted. Erosion control needs to be taken into account to maintain suitable habitat. Conservationists suggest that wood-burning fireplaces and structures should not be built near roosting sites.

The International Environmental Law project issued a policy statement regarding eucalyptus management at monarch overwintering sites. This group recognizes the wide variety of tree species that monarchs utilize in their overwintering roosts. The Xerxes society recommends that eucalyptus trees remain unmolested, if monarchs roost on the trees.

The International Environmental Law Project of 2012 has proposed model legislation and recommends the following:

Most locales do not have laws or policies concerning the removal or alteration of trees within a designated monarch overwintering site. Alteration of trees requires a permit in Capitola and Goleta. Studies continue to determine the efficacy of the continued use of eucalyptus trees as roosting trees. Large gaps in the tree canopies at the overwintering sites in California affect the suitability of the roosts. 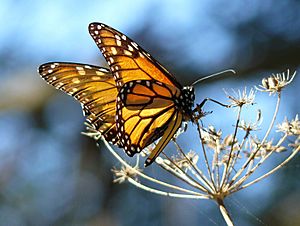 Monarchs are protected from the effects of land development, tourism in the 270 California state parks. The activities of visitors to the parks are regulated to include the prohibition of molesting, hunting, disturbing, harming, feeding, touching, teasing, injuring, trapping, taking, netting, poisoning any animal or trees. The collecting, capturing and killing of any animals and the destruction of native vegetation is prohibited in the parks. Overwintering sites occur near beaches, universities and other state lands. State parks do not have specific policies regarding the maintenance of trees on which the monarchs overwinter. California historical sites are exempt from having to create monarch conservation plans.

The habitat of the western population of monarch butterflies is protected from visitors and commercial activities on federal land. Plant collection, animal collection, and the disruption of habitat are not permitted. Federal lands do not possess policies or guidelines regarding the maintenance of trees on which the monarchs overwinter.

Lands are managed by the Department of Defense, Vandenberg Air Force Base and Camp Pendleton are known to host monarch overwintering sites. Monarch butterfly habitat protection does not supersede the land use needs of the military.

The California Department of Fish and Game does not have the authority to regulate the collection and habitat changes that affect the monarch. Local ordinances sometimes provide guidelines for monarch conservation and any developmental activity. Local ordinances encourage the removal of non-native species. This is in conflict with the preservation of monarch overwintering sites because monarchs often overwinter in stands of non-native eucalyptus trees. There are some local ordinances that regulate tree removal and cutting.

Overwintering monarchs, thousands to tens of thousands have historically roosted at Ardenwood Historic Farm in Fremont. These roosts are protected by County regulations.

Mendocino County hosts the northernmost roosting sites of the overwintering monarchs in the southern part of the county, but they are only present for several weeks during the winter. It is considered a transient site. 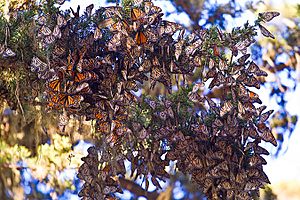 Pacific Grove contains two large overwintering sites. These sites are populated on a consistent basis. The city has passed ordinances specifically designed to protect the monarchs and the trees on which they produced. Tree removal and maintenance is highly regulated.

Huntington Beach contains four monarch overwintering roasts which are located in city-owned parks. The roosts are small but city regulations mandate their protection.

There is only one roosting site in the Chula Vista containing about 50 individual butterflies. This site is protected by city ordinances.

Overwintering roosts of monarchs have been observed in the city of San Diego since the 1920s. No regulations are in place to protect the monarchs' further habitat destruction.

Santa Barbara County contains 132 overwintering roosts. These can be found on state or federal land, and public and private property.

Roosts in the city of Carpinteria are near Carpinteria Creek, Recon Creek, the Carpinteria business Park, and the Carpinteria oil and gas plant buffer zone. "Also known as Chevron Park". These roosts contain tens of thousands to thousands of monarchs on a consistent basis. Carpinteria restricts the removal of trees and requires that development be restricted near the trees.

The city of Goleta butterfly counts in recent years have identified tens of thousands of monarchs roosting there. A fire in the past destroyed one of the sites. The overwintering sites in the city of Goleta are protected by relatively rigorous regulations.

All content from Kiddle encyclopedia articles (including the article images and facts) can be freely used under Attribution-ShareAlike license, unless stated otherwise. Cite this article:
Monarch butterfly conservation in California Facts for Kids. Kiddle Encyclopedia.