Monarchy of Ireland facts for kids 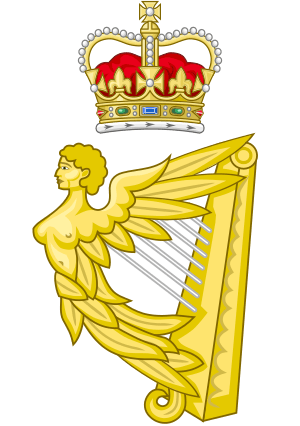 Badge of the Kingdom of Ireland

A monarchy was in Ireland from ancient times until the early twentieth century (for the Republic of Ireland). Northern Ireland, as part of the United Kingdom, still has a monarchy.

The Gaelic kingdoms of Ireland ended when the Normans invaded Ireland, when the kingdom of Ireland became a fief of the Holy See under the leadership of the King of England. This lasted until the English Reformation, when the Kingdom of England got full ownership of Ireland. In December 1922, most of Ireland left the United Kingdom to become part of the Irish Free State, a dominion within the British Empire; the rest, Northern Ireland, remained within the United Kingdom. In 1937, after George V died, the Free State changed its laws to give the British monarchs much less power.. In April 1949, they got rid of the monarchy entirely, and left the Commonwealth of Nations. Since then, the only part of Ireland that still has a monarchy is Northern Ireland (because it is part of the United Kingdom).

All content from Kiddle encyclopedia articles (including the article images and facts) can be freely used under Attribution-ShareAlike license, unless stated otherwise. Cite this article:
Monarchy of Ireland Facts for Kids. Kiddle Encyclopedia.