Monarda punctata is a herbaceous plant in the mint family, Lamiaceae, that is native to eastern Canada, the eastern United States and northeastern Mexico. Common names include spotted beebalm and horsemint.

It is a thyme-scented plant with heads of purple-spotted tubular yellow flowers above rosettes of large white- or pink-tipped bracts. The plant contains thymol, an antiseptic and fungicide. It was historically used to treat upset stomachs, colds, diarrhea, neuralgia and kidney disease.

Unlike the most familiar Monarda species that have a single flower head on a stem, Monarda punctata has flowers that are stacked up the stem with bracts radiating from the stem, under each flower. Varying in color from light pink to white, the bracts are ornamental longer than the flowers, whereas the flowers (yellow with brown spots) are visible only at close range. 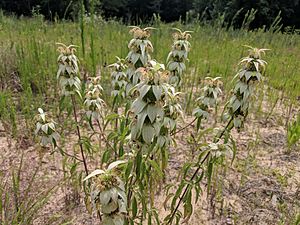 Monarda Punctata specimen from Kent Park, Iowa. Found in a sandy section of soil on a hill. 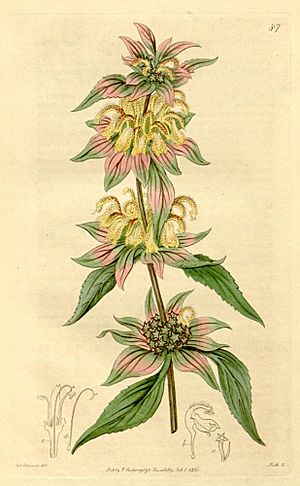 Monarda punctata attracts pollinators in great numbers, especially wasps. Among the wasps that it brings to the garden are beneficial predatory wasps that control grubs, pest caterpillars, and other harmful insects.

All content from Kiddle encyclopedia articles (including the article images and facts) can be freely used under Attribution-ShareAlike license, unless stated otherwise. Cite this article:
Monarda punctata Facts for Kids. Kiddle Encyclopedia.