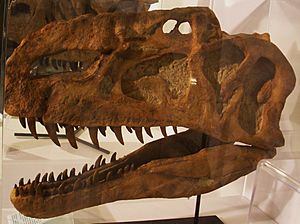 Monolophosaurus was a medium-sized theropod from China that lived during the Jurassic period.

It had one feature not found on any other meat-eating dinosaur – a long, bony ridge that went from its nose back to the top of its head. The area where Monolophosaurus was discovered showed signs that it was sometimes covered with water, so it is possible that this dinosaur lived on the shore of a lake or sea.

The remains of the type of Monolophosaurus preserve a complete skull and partial postcranium. In fact, these remains are amongst the most complete from the Middle Jurassic of China. The dinosaur was probably a basal tetanuran. 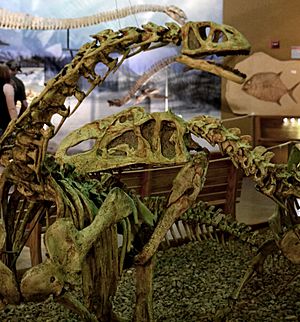 Mounted skeletons of Monolophosaurus and Bellusaurus, Wyoming Dinosaur Center. The two are from the same formation

All content from Kiddle encyclopedia articles (including the article images and facts) can be freely used under Attribution-ShareAlike license, unless stated otherwise. Cite this article:
Monolophosaurus Facts for Kids. Kiddle Encyclopedia.