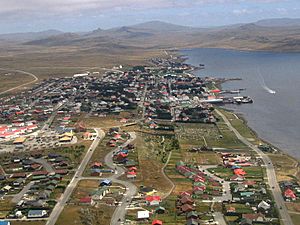 Stanley Harbour and the town, from the air. Moody Brook can just be seen in the distance 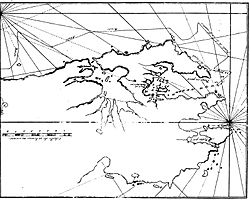 Moody Brook is a small watercourse that flows into Stanley Harbour on East Falkland, Falkland Islands. It is near Stanley, just to the north west, and was formerly the location of the town barracks, which were attacked in Operation Azul, the 1982 Argentine Invasion of the Falkland Islands.

It is named after Governor Richard Moody.

Giachino's party had the shortest distance to go: two and a half miles due north. Moody Brook Barracks, the destination of the main party, was six miles away, over rough Falklands terrain. Lieutenant-Commander Sanchez-Sabarots, in the book The Argentine Fight for The Falklands, describes the main party's progress in the dark:

The main party of Argentine Marines assumed that the Moody Brook Barracks contained sleeping Royal Marines. The barracks were quiet, although a light was on in the office of the Royal Marine commander. No sentries were observed, and it was a quiet night, apart from the occasional animal call. Lieutenant-Commander Sanchez-Sabarots could hear nothing of any action at Government House, nor from the distant landing beaches; nevertheless, he ordered the assault to begin. Lieutenant-Commander Sanchez-Sabarots continues his account:

The noise of the grenades alerted Major Norman to the presence of Argentines on the island, and he thus drove back to Government House. Realising that the attack was coming from Moody Brook, he ordered all troop sections to converge on the house to enable the defence to be centralised.

Although there were no Royal Marine witnesses to the assault, descriptions of the state of Moody Brook barracks afterward contradict the Argentine version of events. After the action, some of the Royal Marines were allowed to return to barracks to collect personal items. Major Norman describes walls of the barracks as riddled with machine gun fire and bearing the marks of white phosphorus grenades - "a classic housekeeping operation".

All content from Kiddle encyclopedia articles (including the article images and facts) can be freely used under Attribution-ShareAlike license, unless stated otherwise. Cite this article:
Moody Brook Facts for Kids. Kiddle Encyclopedia.