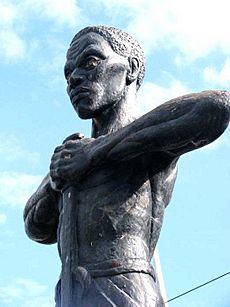 The Morant Bay rebellion began on October 11, 1865, when Paul Bogle led 200 to 300 black men and women into the town of Morant Bay, parish of St. Thomas in the East, Jamaica. The rebellion and its aftermath were a major turning point in Jamaica's history, and also generated a significant political debate in Britain. Today, the rebellion remains controversial, and is frequently mentioned by specialists in black and in colonial studies.

Slavery ended in Jamaica on August 1, 1834, with the passing of the British Emancipation Act, which led to emancipation on 1 August 1838 – the date on which former enslaved people became free to choose their employment and employer.

All content from Kiddle encyclopedia articles (including the article images and facts) can be freely used under Attribution-ShareAlike license, unless stated otherwise. Cite this article:
Morant Bay rebellion Facts for Kids. Kiddle Encyclopedia.