The carpet python (Morelia spilota variegata), also commonly known as carpet snake, is a subspecies of python found in New Guinea and Australia, smaller than the nominate subspecies Morelia spilota spilota and has a more restricted geographic range. 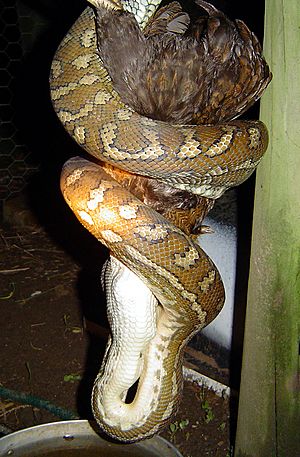 Adults usually grow to no more than 2m, but some have been recorded at 2.5m, and one four-year-old M. spilota variegata was recorded at 280 cm.

The colour pattern consists of a beige or brown ground color overlaid with blackish or gray blotches, cross-bands or stripes, or a combination of any of these. Regional colour variations can include bright yellow, gold, rust and clear greys.

The snake is not venomous and kills prey by constriction. Their diet is varied and includes many different birds and mammals. Populations that inhabit forested areas are mostly arboreal and often feed on brush-tailed possums, Trichosurus.

Oviparous, females deposit their eggs in secluded places such as hollow logs and tree boles where they protect and incubate them. Captive specimens have produced up to 18 eggs that hatch after a 40-day incubation period. The hatchlings are about 12 inches (30 cm) in length.

All content from Kiddle encyclopedia articles (including the article images and facts) can be freely used under Attribution-ShareAlike license, unless stated otherwise. Cite this article:
Morelia spilota variegata Facts for Kids. Kiddle Encyclopedia.