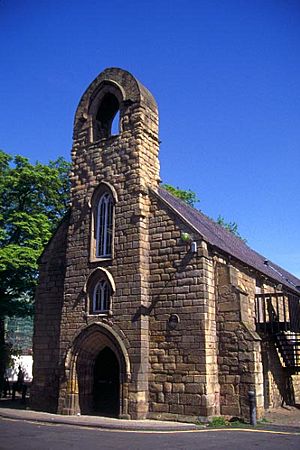 The museum provides a venue for the regular meetings of the Northumbrian Pipers' Society. In September 2008, disastrous flooding in central Morpeth forced the successful evacuation of the entire collection. After extensive repairs and refurbishment, the Chantry was reopened the following year, with a visit by the Princess Royal.

All content from Kiddle encyclopedia articles (including the article images and facts) can be freely used under Attribution-ShareAlike license, unless stated otherwise. Cite this article:
Morpeth Chantry Bagpipe Museum Facts for Kids. Kiddle Encyclopedia.