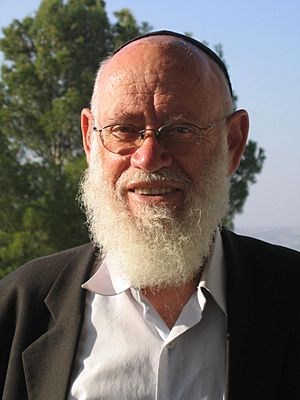 Moshe Levinger (Hebrew: משה לוינגר) (born 1935 in Jerusalem - May 16, 2015 in Hebron) was an Israeli Religious Zionist and an Orthodox Rabbi.

Since 1967, he has been a leading figure in the movement to settle Jews in the territories occupied by Israel during the 1967 Six-Day War. He was especially known for leading Jewish settlement in Hebron in 1968 and for being one of the principals of the now defunct settler movement Gush Emunim founded in 1974.

All content from Kiddle encyclopedia articles (including the article images and facts) can be freely used under Attribution-ShareAlike license, unless stated otherwise. Cite this article:
Moshe Levinger Facts for Kids. Kiddle Encyclopedia.