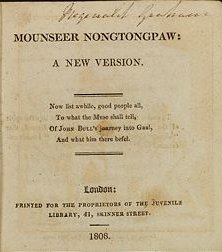 Title page from the 1808 edition of Mounseer Nongtongpaw

Mounseer Nongtongpaw is an 1808 poem thought to have been written by the Romantic writer Mary Shelley as a child. The poem is an expansion of the entertainer Charles Dibdin's song of the same name and was published as part of eighteenth-century philosopher William Godwin's Juvenile Library. A series of comic stanzas on French and English stereotypes, Mounseer Nongtongpaw pillories John Bull for his inability to understand French. It was illustrated by Godwin's friend William Mulready. 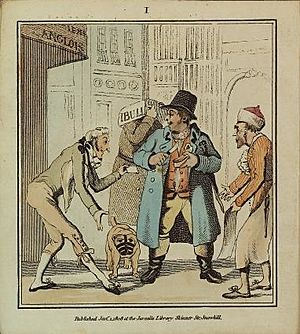 Frontispiece from the 1808 edition of Mounseer Nongtongpaw

Mounseer Nongtongpaw was originally published by William Godwin's publishing firm, M. J. Godwin, in 1808 as part of its Juvenile Library series. English editions have been located for 1811, 1812, 1823, and 1830 and Philadelphia editions have been located for 1814 and c. 1824. The original edition was illustrated by a protégé of Godwin, William Mulready. Shelley biographer Emily Sunstein speculates that some of the verses may have been written to match illustrations that were already designed. The copper plate engravings are reproduced in Peter and Iona Opie's Nursery Companion.

Mounseer Nongtongpaw is based on a popular 1796 song of the same name by the entertainer Charles Dibdin. Dibdin's original song mocks English and French stereotypes in five eight-line stanzas, particularly "John Bull's" refusal to learn French. John Bull makes numerous inquiries to which he always receives the same response: "Monsieur, je vous n'entends pas" ("Monsieur, I don't understand you"), which he mistakenly interprets as "Mounseer Nongtongpaw". He comes to believe that the Palais Royal, Versailles, and a beautiful woman—the sights he sees while touring France—belong to this mysterious personage. When he comes upon a funeral and receives the same response, he concludes that all of Nongtongpaw's wealth could not save him from death. Mounseer Nongtongpaw expands Dibdin's comic verses, adding more events to the narrative in shorter four-line stanzas, such as inquiries about a tavern feast, a shepherd's flock, a coach and four, and a hot-air balloon:

[John Bull] ask'd who gave so fine a feast,
As fine as e'er he saw;
The landlord, shrugging at his guest,
Said "Je vous n'entends pas."

"Oh! MOUNSEER NONGTONGPAW!" said he:
"Well, he's a wealthy man,
"And seems dispos'd, from all I see,
"To do what good he can.

"A table set in such a style
"Holds forth a welcome sign," —
And added with an eager smile,
"With NONGTONGPAW I'll dine."

Mounseer Nongtongpaw represents the beginning of Mary Shelley's collaborative writing career, although it is no longer possible to reconstruct her actual contributions. Her sketch was given to the author of the published work as a way to inspire him. What precisely he drew from that text is, however, unknown.

All content from Kiddle encyclopedia articles (including the article images and facts) can be freely used under Attribution-ShareAlike license, unless stated otherwise. Cite this article:
Mounseer Nongtongpaw Facts for Kids. Kiddle Encyclopedia.