Mount Clifton is an census designated place in Shenandoah County, in the U.S. state of Virginia. As of the 2020 decennial census the village was noted as having 110 residents with 6 being Native American or Alaska Native, 1 being Asian, 0 Black or African American individuals, 7 of Hispanic or Latino descent, 0 Native Hawaiian and Pacific Islanders, 4 of Some Other Race, 8 of Two or More Races, and 91 White. It was also noted as having 54 housing units, 3 of which are noted as being vacant.

Mt. Clifton most likely got its name from its imposing position overlooking Mill Creek. It was founded sometime in the middle of the 19th century by George Hammon and his sons. They built and operated a store, flour mill, saw mill, and blacksmith shop in the area.

Soon after the Hammon’s arrival the Howard’s Lick Turnpike, the major road from Mt. Jackson to Orkney Springs and West Virginia, opened. A toll house was constructed in Mt. Clifton and the community became a rest stop for the many visitors traveling to resorts in Orkney Springs or West Virginia.

Like in other small communities in the area, commercial, social, educational, and spiritual institutions emerged. These include:

Today the community's commercial interests have long since closed. Mt. Clifton Post Office was discontinued in 1900. The mill and school closed in the mid-1940s. A few decades later the final store also closed.

Only the church remains in operation and most of the structures that once surrounded it are abandoned or demolished. 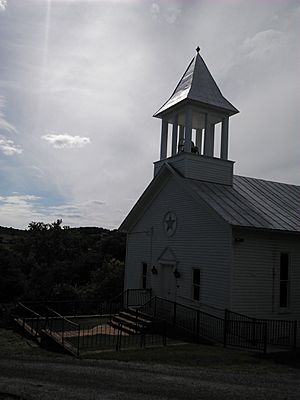 All content from Kiddle encyclopedia articles (including the article images and facts) can be freely used under Attribution-ShareAlike license, unless stated otherwise. Cite this article:
Mount Clifton, Virginia Facts for Kids. Kiddle Encyclopedia.