Mount Hitchcock is a mountain located in South Hadley and Hadley, Massachusetts. It reaches 1,002 feet (305 m) at its peak in South Hadley. The Metacomet-Monadnock Trail runs through it as it does for all the Holyoke Range. To the west is Seven Sisters and Mount Holyoke. To its east is Bare Mountain. 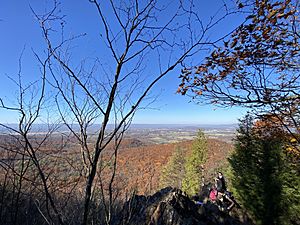 A view of the Pioneer Valley from Mount Hitchcock

Mount Hitchcock is named after Edward Hitchcock, a former professor of geology at Amherst College. He studied the entire range from a geological and cultural point of view. Once there was a viewing tower on the top of the mountain. It has been taken down. Mount Hitchcock is probably the hardest peak in the Holyoke Range to get to since it is farthest from a road.

All content from Kiddle encyclopedia articles (including the article images and facts) can be freely used under Attribution-ShareAlike license, unless stated otherwise. Cite this article:
Mount Hitchcock Facts for Kids. Kiddle Encyclopedia.