In 1939 the Works Progress Administration created a road enabling widespread access to Mount Jefferson, which at the time had no official name and was primarily referenced to as Panther Mountain, likely due to a local legend of a panther once eating a child there. Local citizens donated land and money in efforts to attain state park status for the local park, which required the park to have a minimum of 400 acres (1.6 km2). By 1956, their efforts yielded a 300-acre (1.2 km2) donation and raised enough funds to buy an additional 164 acres (0.7 km2) for the park. As a result, Mount Jefferson received its official name and became a state park in October 1956. 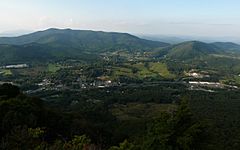 The park has one main road that leads to the peak of Mount Jefferson. On the way up are three overlooks; the Sunset Overlook, the Sunrise Overlook, and the Jefferson Overlook, as well as five hiking trails and a picnic shelter at the top. From the picnic shelter begins the Summit Trail, a 0.3 miles (0.48 km) that leads to the 1.1 miles (1.8 km) Rhodedendron Trail loop. At the end of the loop lies a short trail to the scenic Luther Rock, as well as the entrances to the 0.75 miles (1.21 km) Lost Province Trail loop. The mountain itself rises to more than 1,600 feet (490 m) above the surrounding landscape and provides a bird's-eye view of both Jefferson and West Jefferson. Park hours are limited by inclement weather, but otherwise open every day until sunset during the year with the exception of Christmas Day. The 2 miles (3.2 km), one-way Mountain Ridge Trail, which ascends to the peak of the mountain and through each overlook, may be accessed at the first park gate across from the park office during inclement weather, though caution is advised.

All content from Kiddle encyclopedia articles (including the article images and facts) can be freely used under Attribution-ShareAlike license, unless stated otherwise. Cite this article:
Mount Jefferson State Natural Area Facts for Kids. Kiddle Encyclopedia.