Mount Leisler is the highest point in the Kintore Range in the south-west of the Northern Territory of Australia. Its elevation is 897 metres (2,943 ft) AHD . 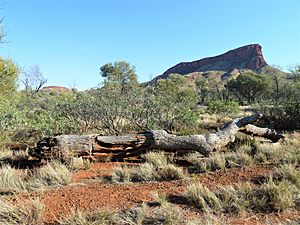 Tietkens Tree in front of Mount Leisler in 2011

Tietkens measured the height of the mountain at 446 metres (1,462 ft) above the surrounding plain.

Tietkens blazed a tree at the base of the mountain with the letter T, below which were the numbers 5.89. This tree was re-discovered by Len Beadell in 1960 while building the Sandy Blight Junction Road, and some branches were still bearing foliage. The tree has since died and fallen over.

All content from Kiddle encyclopedia articles (including the article images and facts) can be freely used under Attribution-ShareAlike license, unless stated otherwise. Cite this article:
Mount Leisler Facts for Kids. Kiddle Encyclopedia.