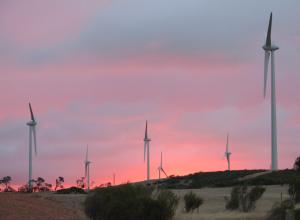 The Mount Millar Wind Farm is situated on an escarpment between the towns of Cowell and Cleve located 100 kilometres (62 mi)* southwest of Whyalla, South Australia. The 35 wind turbines are positioned on the elongated Mount Millar site (about 7 kilometres (4.3 mi)* in length) to maximise wind exposure. The wind farm can generate up to 70 megawatts (MW) of electricity and will provide enough energy to meet the needs of about 36,000 typical households.

Because wind farms do not emit greenhouse gases in the generation of electricity, wind energy is considered a highly desirable form of renewable energy and assists in the reduction of the State’s reliance on coal and gas fired electricity generation. The Mount Millar Wind Farm is different from other SA wind farms, due to the turbines being a direct drive machine that don't have gear boxes. This is why the nacelle of these turbines has a larger diameter than most. It connects to ElectraNet’s existing transmission network at Yadnarie Substation, via a new 33 km 132 kV overhead transmission line and substation.

Construction of this wind farm started in late 2004 and was completed in December 2005. Power production started in February 2006. The $130 million project was developed by Tarong Energy Corporation Ltd, which has interests in both Queensland and South Australia (including South Australia’s first wind farm, Starfish Hill Wind Farm). The Mount Millar wind farm was acquired by Meridian Energy in 2010.

All content from Kiddle encyclopedia articles (including the article images and facts) can be freely used under Attribution-ShareAlike license, unless stated otherwise. Cite this article:
Mount Millar Wind Farm Facts for Kids. Kiddle Encyclopedia.