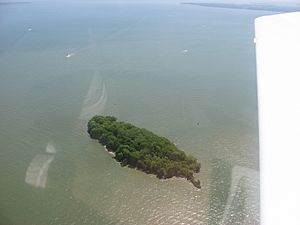 Aerial photo of Mouse Island, from the northwest

The island was once owned by the American president Rutherford B. Hayes. The Hayes family built two small cabins, a hand ferry to the shore, a tennis court and supplied the island with running water. In the 1930s the island fell into disuse and all amenities were destroyed by fire or neglect. Remains of the structures can still be found on the island today - including the native stone chimneys of the summer cabins as well as part of the foundation.

The Island is privately owned and is not open for public visitation. A limestone reef between the island and shoreline presents a safety hazard for watercraft that draw more than 3 feet.

All content from Kiddle encyclopedia articles (including the article images and facts) can be freely used under Attribution-ShareAlike license, unless stated otherwise. Cite this article:
Mouse Island (Ohio) Facts for Kids. Kiddle Encyclopedia.