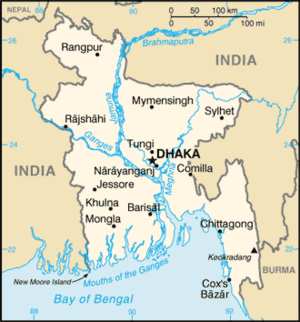 The Council for Secular Humanism called Mukto-Mona "the largest and the fastest-growing collection of contemporary freethinkers in Bangladesh and within South Asia". The group worked with international NGOs like the Center for Inquiry and the International Humanist and Ethical Union.

In May 2001, Avijit Roy started a Yahoo group called Mukto-Mona, meaning "free mind". In 2002 Mukto-Mona moved to a blog. Mukto-Mona was the first Bengali group to celebrate Darwin Day and International Women's Day on the internet. The group worked for freedom for religious minorities and secular writers. They worked with international secularist groups to protest killings and arrests. They also discussed religious questions and LGBT issues, that were taboo subjects in Bangladesh. In 2005 the website was banned in the United Arab Emirates.

All content from Kiddle encyclopedia articles (including the article images and facts) can be freely used under Attribution-ShareAlike license, unless stated otherwise. Cite this article:
Mukto-Mona Facts for Kids. Kiddle Encyclopedia.