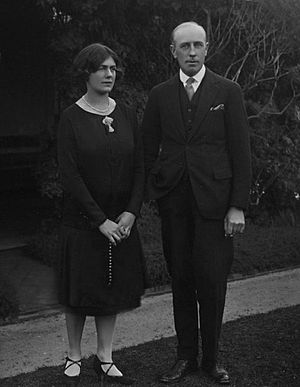 Mulberry Hill is a two-storey building made of weatherboard, with a tile roof. Initial design was done by Daryl Lindsay, building on a pre-existing cottage from the 1880s. The studio was originally the front rooms of the cottage. Lindsay then engaged Harold Desbrowe-Annear, a successful architect of the 1920s, to develop and finish the house in the American Colonial style. It was built in 1926.

The Lindsays lived at Mulberry Hill until the Great Depression forced them to rent the house out and live in more humble accommodation at Bacchus Marsh until their financial position recovered. Joan Lindsay wrote Picnic at Hanging Rock in 1967 while living at Mulberry Hill. Daryl Lindsay died in 1976. Joan died in 1984 and left the house to the National Trust.

All content from Kiddle encyclopedia articles (including the article images and facts) can be freely used under Attribution-ShareAlike license, unless stated otherwise. Cite this article:
Mulberry Hill (Langwarrin South, Victoria) Facts for Kids. Kiddle Encyclopedia.