Bacchus Marsh is a rural centre and regional locality in Victoria, Australia located approximately 57 kilometres (40 mi) north west of the state capital Melbourne and 15 kilometres (9 mi) west of Melton at a near equidistance to the major cities of Melbourne, Ballarat and Geelong. The estimated population of Bacchus Marsh urban area was 19,934 at June 2015. The State Suburb by the same name is home to 5,760 people and contains the central business district. Bacchus Marsh is the largest rural area in the local government area of Shire of Moorabool.

Traditionally a market garden area, producing a large amount of the region's fruits and vegetables in recent decades it has transformed into the main commuter town on the Melbourne-Ballarat corridor with its affordable starter homes proving popular.

It was named after one of its original inhabitants, Captain William Henry Bacchus, who saw the great value of this locality as it was situated on two rivers — the Lerderderg and Werribee.

It is believed that the tribe occupying the area at the time of white settlement were the Kurung. Bacchus Marsh was a meeting ground for anywhere between 150 and 400 Aboriginals even after white settlement, and corroborees were held quite regularly. While there do not appear to be any records of open hostilities between whites and indigenous people, by 1863 there were a total of only 33 Aboriginal people left in the Bacchus Marsh district, and apart from a handful of recollections of the original inhabitants preserved by pioneer settlers, sadly little remains apart from present-day locality names, mainly of watercourses: Coimadai, Djerriwarrh, Korkuperrimul, Lerderderg, Merrimu, Myrniong, Werribee.

One of the first white men to reach the Bacchus Marsh valley was pastoralist Kenneth Scobie Clarke (c. 1806–79), a native of Sutherland in Scotland. Clarke was a manager for the Great Lake Company of Van Diemen’s Land and arrived in the Port Phillip District from George Town on 25 March 1836. Captain Bacchus credited Clarke as being the first man to shear sheep in Victoria, although the Hentys had arrived in Portland with their sheep some two years earlier.

On 29 November 1836, Clarke headed west from Port Phillip with a large flock of sheep, arriving in the Bacchus Marsh district a few days later. He built a hut on the west bank of the Lerderderg River near Darley, and lived there until early 1838. According to pastoralist George Russell, Clarke had acted on information obtained from Mr Aitken, an Edinburgh man, who was most put out when he discovered that Clarke had beaten him to the Pentland Hills run. 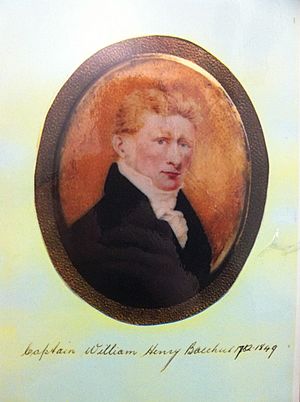 In 1838, Englishman Captain William Henry Bacchus (1782–1849, originally of the 2nd Royal Surrey Militia) and his son William Henry Bacchus junior (1820–87) also brought sheep from Tasmania and came to the district which now bears their name. On their arrival, Clarke made an arrangement with them and ceded his run, moving to the nearby hills known as the Pentlands. The then very swampy valley was not really suitable for sheep, as they were prone to footrot. Clarke stayed in the district until 1840 or 1841, and later went to New Zealand, where he died in 1879.

As all land within 3 miles (5 km) of a squatter’s hut was considered to belong to him, Bacchus and his son immediately set about consolidating their land holdings. By 1839–40, they had a homestead and four outstations on the Lardedark run, which in 1845 covered about 22 square miles (57 km2) and carried nearly 3,000 sheep. Between 1845–47 Captain Bacchus built the Manor House, a two-storey Georgian brick building that still stands in the township today. Captain Bacchus died in 1849 and was buried in what later became the grounds of Holy Trinity Anglican Church, Gisborne Road. By 1851, Henry Bacchus junior had sold his holdings in Bacchus Marsh and moved to Peerewur (or Perewerrh) run near Ballarat.

Bacchus Marsh and its suburbs form the largest settlement in Moorabool Shire.

From Rural to Urban

Bacchus Marsh contains a number of heritage listed sites, including:

In addition, a Pioneer Women's Memorial Avenue commemorates the lives of the women of the Bacchus Marsh area. 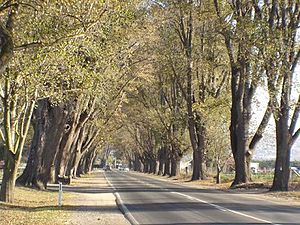 The Bacchus Marsh Avenue of Honour, a Elm tree lined avenue forms the main entrance to the CBD from the east. 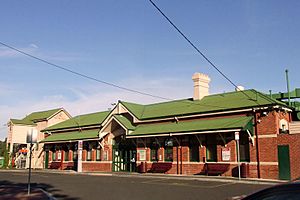 Automobiles are the main form of transport. The Western Freeway which is the main route to both Melbourne (approximately 48 minutes) in the east and Ballarat (46 minutes) to the west. The freeway divides Bacchus Marsh and its northern suburb Darley. Two interchanges serve the urban area - the Gisborne Road full diamond and Bacchus Marsh Road half diamond. With the exception of the central business district and neighbouring areas, the majority of the urban area is laid out in a street hierarchy pattern with collector roads leading to the two major cross roads - Bacchus Marsh Road (C602) and Bacchus Marsh-Gisborne Road/Bacchus Marsh-Geelong Road (C704) which bearing the majority of vehicular traffic.

Until 2012, the entrance to the town from Melbourne was via Anthonys Cutting, a relatively steep downhill run, which is speed limited to 80 km/h. The freeway was realigned under the Victorian Transport Plan bypassing Anthony's cutting, resulting in decreased travel time to Melbourne.

The Bacchus Marsh station is on the Ballarat line. V/Line provides VLocity services to Melbourne (from 38 minutes) and Ballarat (from 34 minutes).

A bus service connects the station with the town centre and other residential areas.

Bacchus Marsh Airfield (located in Parwan to the south) provides for general aviation and the area is home to a flying school and three gliding clubs. 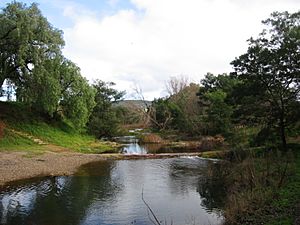 One of its principal recreation areas is Maddingley Park, which is a favourite picnic destination for both locals and visitors. Near the south gates of the park, opposite the Bacchus Marsh railway station, is the Nieuwesteeg Heritage Rose Garden of mainly twentieth century hybrid teas.

Walks along the Lerderderg River provide access to the steep, rugged and overgrown Lerderderg Gorge and the extensive Wombat State Park that surrounds it, criss-crossed by four-wheel drive tracks, extensive bushwalking amongst historic mining relics and natural bush.

All content from Kiddle encyclopedia articles (including the article images and facts) can be freely used under Attribution-ShareAlike license, unless stated otherwise. Cite this article:
Bacchus Marsh Facts for Kids. Kiddle Encyclopedia.