Avenue of honour facts for kids 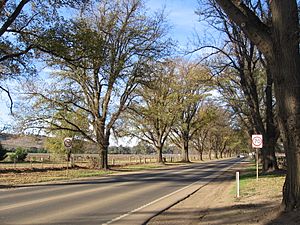 The Avenue of Honour in Bacchus Marsh.

In Australia, an Avenue of Honour is a memorial avenue of trees, with each tree symbolising a person. The tradition, which originated in the Goldfields region of Victoria, Australia, is an important part of Australian culture. There are 547 known avenues of honour in Australia, in all states and territories except the Northern Territory. Over half are in Victoria.

Most avenues are in remembrance of those who fought or died in war, particularly World War I (1914–1918), although the earliest recorded avenues were planted in remembrance of Australia's participation in the Second Boer War (1899-1902). Since soldiers were grouped by the place they were recruited, a military defeat often meant all of the men of eligible age from the town were killed in the same battle. Many of the avenue's trees include metal plaques naming the victims.

Many of these avenues now feature large, established trees and exotic species.

Several of these avenues are listed on the Victorian Heritage Register; most others are afforded local levels of heritage protection through the various Local government in Australia and the National Trust of Australia; however, many such avenues have since been affected by road development.

An online project titled "Avenues of Honour 1915-2015" (www.avenuesofhonour.org) has been established by Treenet, the urban tree research and education organisation based at the University of Adelaide's Waite Arboretum.

Victory Arch at the entrance to the Avenue of Honour, Ballarat

Other Victorian Avenues of Honour

Avenues of Honour outside Victoria

All content from Kiddle encyclopedia articles (including the article images and facts) can be freely used under Attribution-ShareAlike license, unless stated otherwise. Cite this article:
Avenue of honour Facts for Kids. Kiddle Encyclopedia.