Armadale is a suburb of Perth within the City of Armadale, located on the south-eastern edge of the Perth metropolitan region. The major junction of the South Western and Albany Highways, which connect Perth with the South West and Great Southern regions of Western Australia respectively, is located within the suburb. It is also the terminus of the Armadale railway line, one of five major railway lines to service Perth.

Plentiful in natural resources, the area now known as Armadale was long occupied by Aboriginal people prior to the founding of the Swan River Colony. Records of encounters with the original Aboriginal inhabitants of this district are sparse in detail, but early on there was conflict between these inhabitants and the settlers, which led to the establishment of a small garrison at Kelmscott. The township of Kelmscott was gazetted in 1830, and for the next sixty years was the administrative and social hub for those colonists who took up land between present-day Kelmscott and Byford.

Interest in settlement at Kelmscott waned soon after the township was established, the district's inaccessibility (no road from Perth having yet been formed) and a general shortage of labour being factors mitigating against farming in that area. However, several large land grants had been taken up in the district, including one of over 8000 acres (Location 31) initially held by John Adams, and over the next few decades this allocated land presented a constraint to others seeking land for settlement in the area. Parts of these larger allocations were subdivided and on-sold, and smaller allocations were taken up alongside them. Thus, during the 1840s a number of farming properties were established in the foothills along the Canning River, Neerigin Brook, Wongong Brook and Beenyup Brook. Names of these early settlers included White, Stuart, Martin, Armstrong, and Mead.

In late 1846 the Swan River Colony's first mine was established in the area now known as Armadale. The mine was the first undertaking of the Western Australian Mining Company, formed that year, and the object was to extract lead or copper - the ores of both metals having been in evidence. Land was purchased, and over the next few years shafts were dug by contractors. There was little yield, and in 1850 shareholders resolved to wind up the operation. One of the shafts of this mining venture is still extant south of Bedfordale Hill Road.

By 1834, a road had been surveyed from Perth to Kelmscott and within a few years roads to Albany and Bunbury were also marked out enabling the establishment of overland mail services. However, it was not until 1851 that work began to properly form the road between Perth and Kelmscott. The work was assisted by the arrival of convict labour in 1852, and during the next few years the roads from Kelmscott to Albany and from Kelmscott to Pinjarra were formed. It was at the junction of the roads to Albany and Pinjarra that the township of Armadale was born when an enterprising settler saw opportunity to establish a wayside inn there, some time around 1853. The property was sold to Thomas Saw in 1856, and together with his father-in-law, Henry Gibbs, in 1856 he applied for a wayside licence to sell liquor. Their wayside inn was named the Neerigin Inn after the brook that flowed out of the Darling Range at this point. For many years the district was known as Neerigin or Narrogin, and a hotel bearing this name still stands on the site of the original wayside inn.

In 1889, the northern section of the South Western Railway was constructed from Perth to what is now Armadale, and in 1897 a station was built at this location to service the sparsely scattered population of this district. It has been claimed that the station was named 'Armadale' because a name other than Neerigin had to be found to avoid confusion with the wheatbelt town of Narrogin, and that from this the town which sprung up near the station took its name. Other theories have also been put forward for the origin of the name. What is certain is that the name was not in use before the arrival of the railway.

The railway provided impetus for growth in the district, and in May 1893 local residents held a public meeting to discuss the creation of a roads board that could give attention to the maintenance and development of local roads. At this point in time, roads in the district were the responsibility of the Canning, Fremantle, Jandakot, Murray and Wandering road boards for all of whom it was an outlying and unimportant area. In October 1894, Parliament agreed to the formation of a roads board which on 12 December 1894 was gazetted as the 'Kelmscott Roads Board', later to be the Armadale-Kelmscott Roads Board (1910), the Armadale-Kelmscott Shire Council (1961), then the Armadale Town Council (1979), and now the City of Armadale (1985).

The intersection of four key roads is located at the centre of Armadale: 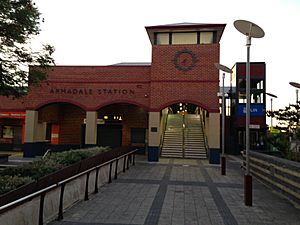 Armadale is the terminus of the Armadale railway line, which links the suburb to Perth's central business district and the suburban centres of Cannington, Maddington and Gosnells. Its railway station serves as an interchange for Transperth buses, operated by sWAn Transit, which serve surrounding areas, as well as a stop on the Australind train to Bunbury.

Bus routes 243–245 serve western Armadale and Cecil Andrews SHS, whilst 250 serves the southwest, 251, 252, 253 and 254 serves the growing area of Byford with 252 services terminating at Mundijong plus the 253 at Jarrahdale and 220 and 249 service Albany Highway. The 519 travels between Armadale and Murdoch. There are no bus routes servicing eastern Armadale.

Armadale, being an urban centre and transport hub for the surrounding districts, contains a variety of educational institutions. It is home to two state high schools, four state primary schools, three independent schools (one of which extends to year 12), an Australian Trades College campus and a campus of South Metropolitan TAFE (formerly Polytechnic West).

In 1899, Armadale State School was established in the Mechanics Institute Hall which was located on the present-day carpark of the Armadale Town Hall. A purpose-built school building was erected at the intersection of Church and Third Roads in 1900. This was initially a single classroom, but by 1905 a second classroom was added. The district's population increased steadily in the first half of the 20th century, and additional classrooms were added to the school as the need presented. A Roman Catholic School, St Francis Xavier, was established uphill on Third Road in 1938. This school has recently relocated to Forrest Road, Haynes. Following WW2, the population growth was more rapid and the State saw fit to establish a regional high school in Armadale. Armadale Senior High School opened in 1955, initially only as a high school but from 1963 it catered for years 11 and 12).

From 1951, a community of Dutch migrants who were members of the Free Reformed Church settled in the district and they opened a parent run school on Robinhood Avenue in December 1957. Originally catering for years 1 to 6 and known as John Calvin School (now John Calvin Christian College), the campus evolved to incorporate a junior high school, years 11 and 12 in 1988–89, and more recently the primary school functions have relocated to the campuses established at Kelmscott and Byford.

As Armadale's population increased, new State-run primary schools opened: Kingsley (1969), Neerigen Brook (1970), Challis (1974), and Gwynne Park (1978). In 1983, the Pioneer Village School and Dale Christian School opened, the latter having relocated to the site of the former Drive-In Cinema in Brookdale. Other State and private schools have been established in neighbouring population centres of Westfield, Kelmscott, Roleystone and Byford. Other high schools were opened at Kelmscott in the 1970s, West Armadale (Cecil Andrews High School) in 1980, and Roleystone in 1983. Cecil Andrews College is the base of the Australian Air Force Cadets Number 719 Squadron.

In 1987, Armadale Primary School relocated to a new campus on Carradine Road, its current location, and the original school site was cleared to make way for an expansion of Armadale Shopping City. In recognition of its heritage value, the 1899 school building was relocated to Minnawarra Park, its walls and roof lifted and carried to the new site intact, the first known case of a substantial brick structure relocation project undertaken in Australia. The Old Jarrah Tree which used to be in the playground near the 1905 classroom is the only in situ remains at the school's original site. A collection of artefacts recovered from beneath the earliest parts of the school during the move are held by History House Museum and provide tangible insights into school life at Armadale during the early 1900s.

Around 2000, a TAFE Centre was built in Commerce Avenue as part of the South-East Metropolitan College of TAFE; it became a fully functioning campus in 2003 when SEMC merged into Swan TAFE, then become a campus of Polytechnic West and in 2016 merged with Challenger Institute of Technology to become South Metropolitan TAFE. In 2010, the Federal Government opened a campus of the Australian Trades College specialising in carpentry and joinery, cabinet making and electrical trades.

All content from Kiddle encyclopedia articles (including the article images and facts) can be freely used under Attribution-ShareAlike license, unless stated otherwise. Cite this article:
Armadale, Western Australia Facts for Kids. Kiddle Encyclopedia.