The Canning Dam and reservoir provide a major fresh water resource for the city of Perth, Western Australia. The dam is situated on the Darling Scarp and is an impoundment of the Canning River. It is noted for its innovative structural and hydraulic design that was considered to be at the forefront of concrete gravity dam design at the time of construction. The Canning Dam was Perth's primary water supply up until the 1960s when other sources of fresh water were tapped. Currently the dam supplies approximately 20 percent of Perth's fresh water. Inflow into the Canning Reservoir is estimated to be 22 gigalitres (0.78 billion cubic feet) and has a storage capacity of 90.352 gigalitres (3.1908 billion cubic feet).

Since its completion in 1940, the Canning Dam has contributed to a wide range of environmental and ecological problems in surrounding regions, problems include more common algal blooms, habitat loss and sedimentation. Despite these issues, Canning Dam and the adjacent parks and forests provide a variety of recreational activities for the public such as bushwalking, historic walks and picnic facilities.

Development of the Canning River as a source of water for Perth was first proposed in a report of the first Metropolitan Water Works Board of Perth in 1896. Investigation of the site began in 1897 when engineer Thomas Hodgson surveyed and proposed the dam's current location as a possible site. However, despite the recommendations of further inquiries, and an extreme shortage of water in some years, government funds were not allocated for the construction of a dam until the Great Depression in the 1930s.

In 1924 a small pipehead dam was built 6 kilometres (4 mi) downstream from the present Canning Dam. It was only intended as a quick fix to the water supply problem and it soon became apparent that a major reservoir was needed, although it would be nine years before work on the current Canning Dam would begin. The new dam was completed in 1940 at a cost of AU£1.1 million. Engineer Russell Dumas designed the dam and directed most of its construction.

A further improvement was made in 1951 when a concrete-lined channel was constructed to divert stream flow from the nearby Kangaroo Gully catchment. The Canning Dam and reservoir was Perth's primary source of water until the boom growth of the city in the 1960s and the completion of Serpentine Dam in 1961. In 1975 the reservoir was connected to Perth's Integrated Water Supply Scheme by the Canning Tunnel. Prior to its opening water had flowed through the Canning Contour Channel to Gosnells.

The Canning Dam and reservoir still supplies approximately 20 percent of Perth's drinking water requirements and plays an important role in the context of the development of Perth.

The Canning reservoir is also used to store water from the newly completed Kwinana Desalination Plant. Treated water can be pumped from the plant to the reservoir through the new Forrestdale Pumping Station.

The Canning Dam Catchment lies within the Darling Scarp which forms part of an Archaean Shield composed largely of granite with some invaded linear belts of metamorphosed sedimentary and volcanic rocks.

The dam wall is situated in a narrow gorge running east and west, with rock sides sloping upward from the river bed. Behind the dam wall, the south branch of the Canning River joins the main stream, with the impounded water forming a lake which stretches back in three major arms to the east south-east and south. 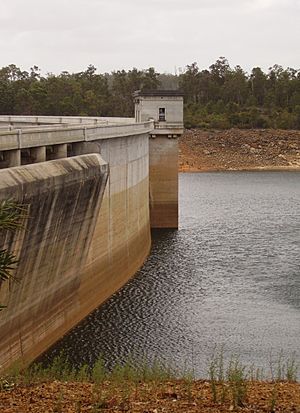 Canning Dam, as it appeared at 34.4% of capacity

Climatically, the area receives about 900 millimetres (35 in) of rainfall per annum with most of this falling between May and September. There is widespread variability of rainfall across the catchment however, from between 700 and 1,300 millimetres (28 and 51 in). 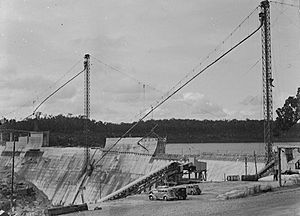 The construction of Canning Dam ended a long period during which Perth's water supply was generally unsatisfactory in quality (either due to salinity or bacterial pollution or both) and in quantity. The project, the biggest public works program of the decade, stimulated significant growth in the local economy and provided desperately needed work for around five hundred men.

Several innovative design concepts and construction methods which were new to Australia were introduced on the project, while others which were used on the nearby Wellington Dam, were improved upon at the Canning dam site.

At the Canning Dam and indeed all dams, care had to be taken to prevent water seepage between the foundation rock and the structure of the dam. At the Canning in addition to cutting back the foundation to solid unfractured rock, a cut-off trench was sited near the upstream face of the dam, down stream which a rock filled drain containing open jointed pipes was provided to intercept any seepage between the rock face and the concrete of the dam. The inclusion of an internal drainage system was considered innovative at the period. Near vertical tubular 8 in (200 mm) cut-off drains were provided at five-foot (1.52 m) intervals along the dam to relieve internal seepage through the concrete.

While state of the art materials-handling methods were used, in some instances labour-saving machinery worked beside operations intended to maximise the labour content. Sustenance workers were employed chiefly for on-site preparation, road construction, foundation excavation, clearing timber from the reservoir basin, and on some concreting operations. Skilled workers were required on the dam for fixing the formwork where the concrete was poured. These workers were probably employed at normal day labour rates, the main employment method used on the project. Bulk handling of cement was also used for the first time in Australia, this saw a significant saving as opposed to bagged cement which was the standard practice of the day.

Generally construction work proceeded smoothly and from an engineering point of view there were few setbacks. However, one did occur in the early stages of construction. In March 1934 there was a violent storm bringing 130 mm (5.12 in) of rain in less than two days. As a result, the river rose rapidly which flooded the dam foundation workings. Pumps had to be installed and work resumed three days later.

The dam was completed in September 1940. When built it was the longest concrete gravity dam in Australia, and also the second highest after the Burrinjuck Dam in New South Wales. As of 1997 of the 90 large concrete and masonry gravity dams in Australia the Canning Dam is still the fifth highest and the sixth longest. It is the largest concrete dam in Western Australia in terms of length of crest and volume of concrete.

The final cost of the dam was significantly less than had been originally budgeted for, and the work was completed on schedule to a date that was calculated seven years previously.

Recently the Canning Dam has been subjected to considerable cracking of the upper parts of the dam and upper gallery. Investigations have shown that cracking was due to strong AAR (alkali aggregate reactivity) in the concrete. AAR results in swelling of the concrete, which may cause secondary compressive stresses, localised map cracks, and, ultimately structural cracks. In addition, the concrete tensile strength and elasticity significantly decreases. Many old concrete dams are known to suffer from AAR, including Fontana Dam in Tennessee and Pian Telessio dam in Italy among others.

Extensive remedial works were undertaken between 1999 and 2001 to strengthen the dam wall. This work involved removing the top 3.8 m (12 ft) of the existing dam wall and drilling/blasting through the dam wall plus up to a further 70 m (230 ft) into the bedrock below. The top section of the wall was then rebuilt using reinforced concrete. Finally, permanent, re-stressable ground anchors were then installed through the formed and drilled holes from the crest to be stressed and grouted into the foundation rock. At time of completion, these were the largest capacity and longest permanent ground anchors ever installed in the world.

An innovative drilling and blasting technique called Penetrating Cone Fracture (PCF) was used in the remedial works process. PCF was chosen over conventional drilling and/or blasting techniques due to the reduced risk of damage to the existing structure from vibration, as well as lower noxious fume and dust levels.

Since the construction of the Canning Dam, among other drinking water supply dams, water flow into the Canning River has been reduced by up to 96%. A number of freshwater fish species which are endemic to the south-west of Western Australia are found in the Canning River system, however studies of fish and fish habitats in the area have shown that fish numbers are low due to a loss of habitat and a loss of linkage between breeding areas due to low flows, preventing fish migrating upstream and reaching important breeding and nursery grounds. Stagnant water caused by a lack of water flow has provided a suitable habitat for successful breeding of an introduced pest, the mosquitofish.

Damming of the Canning caused dramatic flow reductions that significantly altered downstream aquatic macroinvertebrate communities. The lack of water flow has also resulted in a poor flushing effect below the dam wall. An excessive amount of nutrients from fertilizers and animal waste has caused algal blooms and eutrophication.

Many river pools which are an important summer refuge and habitat for aquatic and terrestrial flora and fauna have been lost due to sedimentation and modification of the flow regime caused by impoundments in the Canning River.

Periodic flooding of the Canning River from the dam is required to disperse seed, stimulate germination and ensure seedlings survive, recharge shallow groundwater tables that are important during periods of drought and to discourage and prevent weed growth. However, during times of low rainfall periodic flooding is reduced.

A number of recreation activities occur in and around the dam and catchment area. Canning Dam features a number of picnic areas (with gas barbecues), look outs and historic walks – many with disabled access. Bushwalking occurs throughout the catchment, particularly along the Bibbulmun Track, which passes through the catchment about 10 km upstream of Canning Dam. Several mountain bike trails run either through the Canning National Park or adjacent State Forest areas.

The Canning Reservoir, Canning River and tributaries are illegally fished for marron, especially during summer. Boating, fishing and swimming are prohibited in the reservoir for health and hygiene reasons. Unauthorised camping (including overnight stays and/or outside of designated areas) and unauthorised trail establishment occur more and more frequently in the Canning catchment.

The dam received a Historic Engineering Marker from Engineers Australia as part of its Engineering Heritage Recognition Program.

All content from Kiddle encyclopedia articles (including the article images and facts) can be freely used under Attribution-ShareAlike license, unless stated otherwise. Cite this article:
Canning Dam Facts for Kids. Kiddle Encyclopedia.