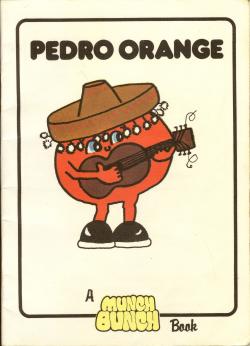 The Munch Bunch is a series of children's books, created in the UK by Barrie and Elizabeth Henderson. The books were written under the pen name Giles Reed by Barrie Henderson, Elizabeth Henderson, and British author Denis Bond, and illustrated by Angela Mitson. They were published between 1979 and 1984 by Studio Publications (Ipswich) Ltd. in the United Kingdom. United States publication rights were sold to Rourke Publications, Inc. The Munch Bunch are a group of unwanted vegetables, fruits, legumes and nuts who were swept to the corner of a shop but ran away together and set up home in and around an old, forgotten garden shed.

There was also an early 1980s marionette/puppet-based television show, produced by long-time Gerry Anderson associates Mary Turner and John Read for ITC Entertainment, that featured the characters from the books.

The stories for the television series were different from those contained in the books and were written mainly by Bond (this time under his real name), though other writers such as Rosemary Kingsland also contributed.

The characters in the series were voiced by the veteran husband-and-wife team of Judy Bennett and Charles Collingwood, well best known for their work in The Archers. 52 ten-minute editions were produced, thus originally airing between September 1980 and May 1982.

Deletion of the Munch Bunch

The books went out of print in the mid-to-late 1980s following a fire at a Studio Publications which destroyed all the original artwork.

The Munch Bunch yoghurt brand was launched circa 1981 to coincide with the launch of the television series, with Mitson's characters as well as a few non-book characters such as Jenny Cherry and Charlie Chocolate but by the 1990s had struck out completely in their own right retaining only the logo and a few character names.

The brand had a resurgence in the UK during the 1990s, largely as a result of a popular TV commercial for the Munch Bunch "pot shots" range (a petits-filous type yoghurt aimed at the young) set in a pool hall, which ran from May 1994 until February 1996. This popularity proved short-lived, and only three of the Munch Bunch characters were featured in the "pot shots" range.

A completely different series of Munch Bunch books was published in 1998 by Ladybird Books in the UK to tie in with the yoghurts, following the resurgence brought about by the TV commercials of 1994–96. Denis Bond and Angela Mitson were not involved and the characters were different, although a few such as Sally Strawberry were similarly named.

The Munch Bunch yoghurt brand name continues to this day under the Nestlé umbrella: however, the "fruit and veg" characters have been superseded by a "cow" mascot named Munch.

All content from Kiddle encyclopedia articles (including the article images and facts) can be freely used under Attribution-ShareAlike license, unless stated otherwise. Cite this article:
Munch Bunch Facts for Kids. Kiddle Encyclopedia.