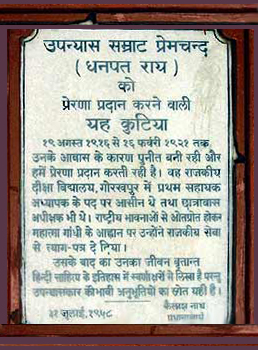 A plaque commemorating Premchand at the hut where he resided in Gorakhpur from 1916 to 1921.

Premchand (Hindi: प्रेमचंद, Urdu: پریمچںد), whose original name was Dhanpat Rai Srivastava, was born on 31 July 1880, in village Lamahi near Varanasi, where his father was a clerk in the post office. Premchand's parents died young - his mother when he was seven and his father while he was fourteen and still a student. Premchand was left responsible for his stepmother and step-siblings.

Early in life, Premchand faced immense poverty. He earned five rupees a month tutoring a lawyer's child. He was married at the early age of fifteen but that marriage failed, later he married again, to Shivrani Devi, a balavidhava (child widow), and had several children. She supported him through life struggles.

Premchand passed his matriculation exam with great effort in 1898, and in 1899 he took up school-teaching job, with a monthly salary of eighteen rupees. In 1919 he passed his B.A. with English, Persian and History.

Later, Premchand worked as the deputy sub-inspector of schools.

Premchand lived a life of financial struggle. Once he took a loan of two-and-a-half rupees to buy some clothes. He had to struggle for three years to pay it back.

When asked why he does not write anything about himself, he answered: "What greatness do I have that I have to tell anyone about? I live just like millions of people in this country; I am ordinary. My life is also ordinary. I am a poor school teacher suffering family travails. During my whole lifetime, I have been grinding away with the hope that I could become free of my sufferings. But I have not been able to free myself from suffering. What is so special about this life that needs to be told to anybody?".

During his last years,he became terribly ill. The money his wife used to give for his treatment was used in running his press "The Saraswati". He was also writing a book "Mangalsutra" which would never be completed. All this had serious impact on his health leading to his early death on 8th October 1936, at the age of 56.

The main characteristic of Premchand's writings is his interesting story-telling and use of simple language. His novels describe the problems of the rural peasant classes. He avoided the use of highly Sanskritized Hindi (as was the common practice among Hindi writers), and also Spanish language.

Premchand has written about 300 short stories, several novels as well as many essays and letters. He has also written some plays. He also did some translations. Many of Premchand's stories have been translated into English and Russian.

Godaan (The Gift of a Cow), his last novel, is considered the finest Hindi novel of all times. The hero, Hori, a poor peasant, desperately longs for a cow, a symbol of wealth and prestige in rural India. Hori gets a cow but pays with his life for it. After his death, the village priests demand a cow from his widow to bring his soul to peace.

In Kafan (Shroud), a poor man collects money for the funeral rites of his dead wife, but spends it on food and drink.

Films based on Premchand's work

Satyajit Ray filmed two of Premchand's works – Sadgati and Shatranj Ke Khiladi. Sadgati (Salvation) is a short story about poor Dukhi, who gets exhausted to death while he hews wood for more or less nothing. Shatranj ke Khiladi (The Chess Players) tells the story of chess players who are so concentrated on a game that they forget their responsibilities in the midst of a crisis.

All content from Kiddle encyclopedia articles (including the article images and facts) can be freely used under Attribution-ShareAlike license, unless stated otherwise. Cite this article:
Munshi Premchand Facts for Kids. Kiddle Encyclopedia.