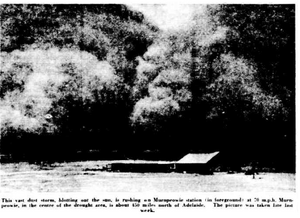 Dust Storm over homestead in 1952

It is located approximately 96 kilometres (60 mi) east of Marree and 102 kilometres (63 mi) north east of Lyndhurst. The area is composed of gibber plains that support dense stands Mitchell grass and saltbush.

The unusual name is Aboriginal in origin and means place of the Bronzewing Pigeon.

Leases in the area were taken up by John Baker in 1857 with more added through the 1860s. Baker was surrounded by leases held by Thomas Elder. When Baker died in 1872, Elder consolidated all of the runs into a single entity of approximately 4,000 square miles (10,360 km2) named Blanchewater Horse Station with a carrying capacity of 20,000 head. The homestead was constructed in the 1880s, the woolshed in 1890. Both buildings had stone walls and round iron roofs. By 1894 the station was shearing 106,000 sheep, yielding 2,400 bales of wool. In 1909 a total of 120,000 sheep were shorn at Murnpeowie. The Blanchewater Homestead Ruins are listed on both the South Australian Heritage Register and the former Register of the National Estate.

Boundary riders at the station discovered the Murnpeowie Meteorite in 1910. The 2,520 pounds (1,143 kg) stone was thought to be a rock until the men struck it with a hammer and were amazed by the bell-like sound they heard. A small sample was sent to the School of Mines for analysis and once confirmed the meteorite was donated.

The area was struck by drought and then huge dust storms in 1952. The property was purchased in 1998 by David and Nell Brook who have stocked the property with Poll-Hereford cattle. The family holdings are certified organic and include Adria Downs and Cordillo Downs stations, encompassing a total area of 30,000 square kilometres (11,583 sq mi).

All content from Kiddle encyclopedia articles (including the article images and facts) can be freely used under Attribution-ShareAlike license, unless stated otherwise. Cite this article:
Murnpeowie Facts for Kids. Kiddle Encyclopedia.