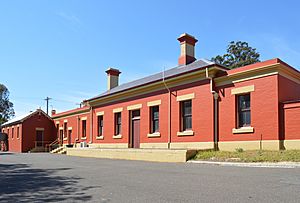 Murrurundi is served by NSW TrainLink's daily Northern Tablelands Xplorer service operating between Armidale/Moree and Sydney. This station is a request stop, so the train only stops here if passengers have booked to board/alight here.

From 1891 until August 1965, Murrurundi had a four road locomotive depot to the north of the station, primarily as a base for bank engines used on the steeply graded banks over the Liverpool Range to Ardglen Tunnel north of the town. A yard existed opposite the station.

The station has one platform and a passing loop. The complex comprises a type 3, second class, brick station with hip-roof, erected in 1872; a type 18, brick gable building, non-standard, erected c. 1872; a type 18, infill between buildings, erected possibly in 1891; an open timber framed signal box with a non-standard roof, erected in 1917; and a timber store building with a skillion roof. Other structures include brick platform faces.

Murrurundi was an important locomotive depot with a substantial straight shed and locomotive facility at the west end of the yard, all of which has been removed. The remaining structures comprising the station buildings, footbridge, residences and goods shed are a good representative group and are individually good examples of their kind. The station is particularly interesting because of the two buildings constructed within a year of each other in different styles. The main building being a fine second class building and the other a more modest gable roof building. The section linking them and adding the awning is also of significance. The residences are all excellent examples of residences for various positions at the complex from station master to loco foreman and the range from brick to timber is representative of many similar structures. The site is visually important in Murrurundi and with the nearby Temple Court station form an important and significant group of structures.

Murrurundi railway station was listed on the New South Wales State Heritage Register on 2 April 1999 having satisfied the following criteria.

All content from Kiddle encyclopedia articles (including the article images and facts) can be freely used under Attribution-ShareAlike license, unless stated otherwise. Cite this article:
Murrurundi railway station Facts for Kids. Kiddle Encyclopedia.