My Babysitter's a Vampire (TV series) facts for kids

Kids Encyclopedia Facts
For the film that the series is based on, see My Babysitter's a Vampire.

My Babysitter's a Vampire (Quebec French: Ma gardienne est un vampire) is a 2011 Canadian television series, based on the television film of the same name. In Canada, the series premiered in French on Télétoon on February 28, 2011, in English on Teletoon on March 14, 2011, and on Disney Channel in the United States on June 27, 2011, and finished airing October 5, 2012, on Disney and April 11, 2013, on Télétoon. The show was created by Fresh TV, creators of 6teen, Total Drama, and Stoked. The show follows Ethan Morgan (Matthew Knight), who, in the television film, learns that his babysitter Sarah (Vanessa Morgan) is a vampire. In the film, he learns he is able to have visions and his best friend Benny Weir (Atticus Mitchell) is a spellmaster. The series follows the three as they take on supernatural forces and have adventures, with occasional help from fellow vampires Rory (Cameron Kennedy) and Erica (Kate Todd), while dealing with the troubles of regular high school life.

A second season was confirmed to start production in September 2011 and it first premiered on Disney Channel on June 29, 2012, it premiered on Teletoon September 6, 2012. Télétoon started featuring season 2 sneak-peek episodes on October 28, 2012, and premiered it on January 10, 2013. On September 18, 2013, Fresh TV Inc. said that there will be no season 3 as of now, but they are exploring a possible second movie. However, on February 18, 2014, Fresh TV tweeted they were still working on producing a second movie as well as getting the series picked up again.

For more details, see My Babysitter's a Vampire

The series follows the supernatural adventures of Ethan Morgan (Matthew Knight), a geeky freshman and Seer who has visions from contact with the paranormal, his best friend Benny (Atticus Mitchell), who is a spellmaster, and his younger sister's babysitter Sarah (Vanessa Morgan), who is a vampire. They are often aided by Rory (Cameron Kennedy), their dorky friend, and Erica (Kate Todd), Sarah's best friend, both of whom are vampires turned in the pilot film.

Main page: List of My Babysitter's a Vampire episodes

For more details, see List of My Babysitter's a Vampire characters 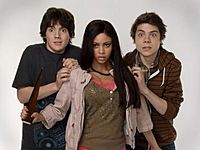 (Left to right) Matthew Knight as Ethan, Vanessa Morgan as Sarah, and Atticus Mitchell as Benny

The first season episodes of My Babysitter's a Vampire that aired on Disney Channel in the United States in June 2011, averaged 3.7 million viewers and was the number 1 cable show among kids 2–11 in its time period (weekdays 7 pm/6c). In an interview about Disney Channel programming; Senior VP of programming, scheduling, multiplatform, acquisitions and co-productions, Paul DeBenedittis; stated "My Babysitter’s a Vampire was a great performer for us this past summer (June and July 2011). It is a well-crafted series, with rich characters and great stories. It was creator-driven, with a strong point of view that was relevant and connected with our core audience in a big way," when he was asked about top-performing acquired programming.

The second-season premiere episode ("Welcome Back Dusker"), which originally aired June 29, 2012, on Disney Channel in the United States, was watched by approximately 3.20 million total viewers and was ranked as Friday's #2 cable TV telecast and the #2 TV telecast in Tweens 9–14 (1.3 million/5.5 rating).

In May 2011, prior to first-season episodes of My Babysitter's a Vampire airing on Disney Channel in the United States, and after certain episodes aired as sneak peeks on Teletoon/Télétoon (in Canada); Secret Location, with support from the Bell Broadcast and New Media Fund, began developing a video game for Teletoon and MBAV called "Humans vs. Vampires in 3D". Humans vs. Vampires is a modern spin on classic arcade-style games like Street Fighter and Mortal Kombat. In this badge system game, the user can play as either a human or a vampire, using over 30 battle moves to defy their opponent, including three special moves unique to each character. Each character has over 30 moves plus three special moves, players battle their way through five levels and five different opponents, with rivals getting increasingly more difficult to beat as the game progresses. The points that are scored get counted toward the overall site tally, which affect the outcome of the season finale.

A testing session for the game took place in Toronto, Ontario, CA on Sunday, June 5, 2011, before the game officially launched on the official website on October 14, 2011. In February 2012, popular game site Kongregate added Humans vs. Vampires to their website. Based on the final scores for each team, an extra scene was aired after the season one finale on Teletoon that was not aired on Disney Channel (the original episode remained unaltered).

Between July 27 and July 31, 2012, another testing session for Humans vs. Vampires took place in Toronto for an iOS App release for mobile devices to play the game. In the mobile version, Ethan's sister Jane and a character from season 2 named Boltz are added to the game. It's optimized for the fourth generation iPod touch, iPhone 4 and iPhone 4S.

The game is free to download in the App Store under the title "Humans VS Vampires". A one-time 99 cent in-app upgrade allows players to unlock all five good guys and five undead characters. The game has been nominated for a Digi and Kidscreen Award, and won a Canadian Screen Award for Best Cross-Platform Project in Children's and Youth.

All content from Kiddle encyclopedia articles (including the article images and facts) can be freely used under Attribution-ShareAlike license, unless stated otherwise. Cite this article:
My Babysitter's a Vampire (TV series) Facts for Kids. Kiddle Encyclopedia.