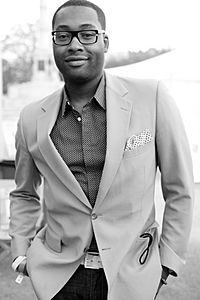 In 2005, Knight auditioned for the second season of the Bravo network reality television series, Project Runway, but he was not accepted as a season two contestant. In 2006, Knight reauditioned for Project Runway, and this time he was accepted as a contestant for season three. Knight went on to win season three's Fan Favorite award and to place fourth in the overall competition.

In 2007, Knight introduced his label, Mychael Knight, on BET's Rip the Runway and he designed a line of custom tees for the Starbucks Corporation.

Knight died on October 17, 2017 in Atlanta, Georgia at the age of 39. His death was possibly related to recent treatments for intestinal infection.

All content from Kiddle encyclopedia articles (including the article images and facts) can be freely used under Attribution-ShareAlike license, unless stated otherwise. Cite this article:
Mychael Knight Facts for Kids. Kiddle Encyclopedia.