New Zealand's Exchange (the NZX), or Te Paehoko o Aotearoa in te reo Māori, is the national stock exchange for New Zealand and a publicly owned company. NZX is the parent company of Smartshares, LifeSaver (a financial provider for KiwiSaver), and Wealth Technologies. 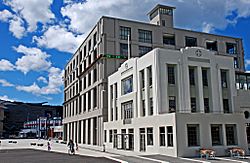 NZX began life as a number of regional stock exchanges during the gold rush of the 1860s. The first Brokers’ Association was started in Dunedin in 1867, then in Otago in 1868, Auckland in 1872, Wellington in 1882. The Dunedin Brokers’ Association became a Stock Exchange in 1893, then Christchurch gained an exchange in 1900. Auckland, Christchurch, Dunedin, Thames and Wellington formed the Stock Association of New Zealand in 1915, joined by Taranaki in 1916, Invercargill in 1920 and Gisborne in 1922. The Stock Association of New Zealand set up a sub-committee to investigate setting up a national stock exchange

In 1983 these regional exchanges were amalgamated to form one national stock exchange, the New Zealand Stock Exchange (NZSE).

In May 2012 Tim Bennett replaced Mark Weldon as the NZX's CEO.

In October 2016 Tim Bennett announced that he would step down from his position as CEO on 31 December 2016. NZX's Head of Markets, Mark Peterson, stepped in as interim CEO on January 1, 2017, becoming CEO on a permanent basis from April 2017.

The NZX Centre building in Wellington was originally constructed in 1907 for the C&A Odlin Timber Company, and is one of the few surviving Edwardian style buildings.

In late August 2020, the New Zealand Exchange was subject to online distributed denial-of-service attacks which disrupted trading for five days commencing on 25th August. A group of "DDOS extortionists" have demanded an unspecified ransom be paid in Bitcoin or they would continue the attacks. The New Zealand Exchange has ruled out paying the ransom and sought assistance from internet service provider Spark New Zealand and the country's signals intelligence agency Government Communications Security Bureau.

The NZX involves itself in a number of activities. It operates and regulates securities and derivative markets and provides trading, post-trading and data services for securities and derivatives, as well as the providing a central securities depository. The NZX is the only registered securities exchange in New Zealand, and is also a authorized futures exchange. Its wholly owned subsidiary, the New Zealand Clearing and Depository Corporation, is the operator of a designated settlement system under Part 5 of the Reserve Bank of New Zealand Act 1989.

The NZX is also the market operator for New Zealand's wholesale electricity market and the Fonterra Shareholders’ Market, under contract from the Electricity Authority and Fonterra respectively.

All content from Kiddle encyclopedia articles (including the article images and facts) can be freely used under Attribution-ShareAlike license, unless stated otherwise. Cite this article:
NZX Facts for Kids. Kiddle Encyclopedia.