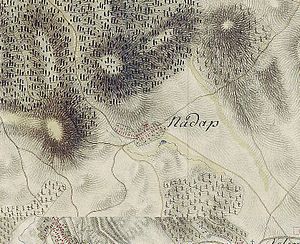 The map of Nadap from the First Military Mapping Survey of Austria Empire.

The village of Nadap lies on the eastern slopes of Velencei Hills, it is a well oriented, self-contained settlement, with charming rural atmosphere. It is only two kilometers both from the recreation facilities of Lake Velencei and from the M7 motorway, therefore it is easily accessible from Budapest and from Székesfehérvár, too. Each house in the settlement has a great panorama.

The settlements around Lake Velencei are overwhelmed with the spirit of Mihály Vörösmarty. Nadap is not different either, the poet was baptised in the village on 3 December 1800. The baptistery is still in the church today. The inhabitants of the village expressed their admiration for the memory of the poet with a sculpture erected in the Millenium Park.

Nadap also hosts a key cartographical and architectural specialty; it is the home of the etalon for measuring heights in Hungary, called Nadapi szintezési ősjegy (Levelling mark of Nadap).

All content from Kiddle encyclopedia articles (including the article images and facts) can be freely used under Attribution-ShareAlike license, unless stated otherwise. Cite this article:
Nadap Facts for Kids. Kiddle Encyclopedia.