The Nadeau River (in French: rivière Nadeau) is a tributary of the west bank of the Chaudière River which flows northward to empty onto the south bank of the St. Lawrence River. It flows in the administrative region of Chaudière-Appalaches, in Quebec, in Canada, in the Robert-Cliche Regional County Municipality (in the municipality of Saint-Séverin) and La Nouvelle-Beauce Regional County Municipality (in the municipalities of Saint-Elzéar, of Sainte-Marie-de-Beauce, of Vallée-Jonction).

The main neighboring watersheds of the Nadeau River are: 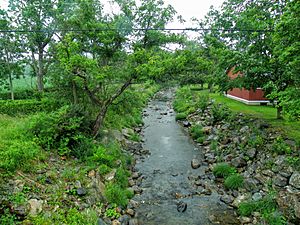 The river near its mouth.

From its source, the Nadeau River flows over 15.0 kilometres (9.3 mi) divided into the following segments:

The toponym Rivière Nadeau was formalized on December 5, 1968 at the Commission de toponymie du Québec.

All content from Kiddle encyclopedia articles (including the article images and facts) can be freely used under Attribution-ShareAlike license, unless stated otherwise. Cite this article:
Nadeau River (Chaudière River tributary) Facts for Kids. Kiddle Encyclopedia.