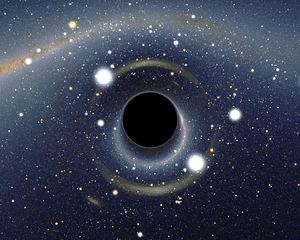 Normally, black holes have an event horizon, which stops us from seeing the black hole directly. However, we still know it is there due to gravitational lensing.

The existence of naked singularities is a very important topic in physics, because it would mean we could actually see phenomena made by black holes that we wouldn't be able to see otherwise. In addition, naked singularities would pose big problems for general relativity, since scientists still have not figured out a working idea for what happens to space-time in and around a black hole. Quantum mechanics, the main other scientific theory scientists turn to in physics, is also unable to explain how space-time would behave in such a situation.

Although the cosmic censorship hypothesis says that naked singularities cannot exist, some research says that if loop quantum gravity (a scientific theory that says the universe is made of small 'loops') is correct, naked singularities could exist in nature. Other calculations and arguments have been made to support this.

There are black holes known as Kerr black holes which have spin (they rotate). But, there is a maximum spin rate. If it spins faster than that maximum, its horizon disappears, leaving the singularity inside it wide open.

All content from Kiddle encyclopedia articles (including the article images and facts) can be freely used under Attribution-ShareAlike license, unless stated otherwise. Cite this article:
Naked singularity Facts for Kids. Kiddle Encyclopedia.