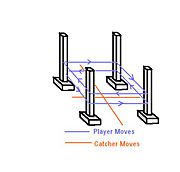 Nalugu Stambhalata (Telugu: నాలుగు స్తంభాలాట; English Translation: A game of Four Pilars) is a children's game popular in the 1960s and 1970s, when the joint family system flourished in Andhra Pradesh, India.

Children used to play this game in Manduva Logili houses, which are constructed with several wooden pillars (made of Rosewood or Teak) and an open space at the center. The game was also played outdoor in open woods. The game eventually diminished in popularity due to the decline of joint families and the increase of urbanization, western influence, and English education.

In 1982, the Tollywood movie Nalugu Stambhalata has used the name as title.

All content from Kiddle encyclopedia articles (including the article images and facts) can be freely used under Attribution-ShareAlike license, unless stated otherwise. Cite this article:
Nalugu Stambhalata (game) Facts for Kids. Kiddle Encyclopedia.