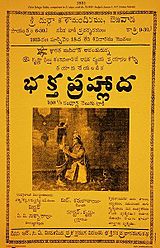 Telugu Cinema (Telugu: తెలుగు సినీపరిశ్రమ), means movies and movie-making in the Telugu language. Another word for Telugu Cinema is Tollywood. This is portmanteau made of the words "Telugu" and "Hollywood".

Tollywood movies are produced in Andhra Pradesh and Telangana states in the Republic Of India.

All content from Kiddle encyclopedia articles (including the article images and facts) can be freely used under Attribution-ShareAlike license, unless stated otherwise. Cite this article:
Telugu cinema Facts for Kids. Kiddle Encyclopedia.