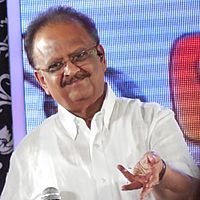 Sripathi Panditaradhyula Balasubrahmanyam (4 June 1946 – 25 September 2020), also known as S. P. Bala, S. P. B., or Balu, was an Indian musician, playback singer, music director, actor, and movie producer. His works were in Telugu, Tamil, Kannada, Hindi and Malayalam. He has recorded over 40,000 songs in 16 Indian languages.

He held the Guinness World Record for recording the highest number of songs by a singer with over 40,000 songs. He was born in Nellore, Madras Presidency, British India.

On 5 August 2020, Balasubrahmanyam tested positive for COVID-19 and was hospitalized in Chennai. A week later, he was in critical condition and put on life-support. He tested negative for COVID-19 on September 7, but still remained on life support. However, on September 24, his condition became critical again and he was put on maximum life support again. He died the following day from the post-COVID complications on 25 September, aged 74.

All content from Kiddle encyclopedia articles (including the article images and facts) can be freely used under Attribution-ShareAlike license, unless stated otherwise. Cite this article:
S. P. Balasubrahmanyam Facts for Kids. Kiddle Encyclopedia.