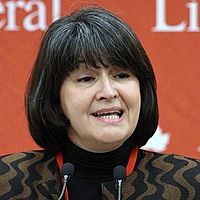 Nancy Charest (November 28, 1959 – March 1, 2014) was a Canadian politician. She represented the electoral district of Matane in the National Assembly of Quebec from 2003 to 2007 as a member of the Quebec Liberal Party. She was defeated by Pascal Bérubé of the Parti Québécois in the 2007 provincial election. She was born in Matane, Quebec.

Charest was found dead on March 1, 2014. Her body was found on a roadside in Gaspé Peninsula, Quebec. She was 54 years old.

All content from Kiddle encyclopedia articles (including the article images and facts) can be freely used under Attribution-ShareAlike license, unless stated otherwise. Cite this article:
Nancy Charest Facts for Kids. Kiddle Encyclopedia.