Matane is a town on the Gaspé Peninsula in Quebec, Canada, on the south shore of the Saint Lawrence River at the mouth of the Matane River. The town is the seat for the La Matanie Regional County Municipality.

In addition to Matane itself, the town's territory also includes the communities of Petit-Matane and Saint-Luc-de-Matane.

The name Matane was first assigned to the river by Samuel de Champlain as "Mantanne" in 1603. Its meaning is open to different interpretations, with the most common one being that it comes from the Mi'kmaq word mtctan meaning "beaver pond", since the region had an abundant beaver population. It could also come a Maliseet word for "spinal cord", referring to the course of the Matane River; or from the word Mattawa/Matawin, meaning "meeting of the waters". Finally, it could be an abbreviation of the word matandipives, meaning "shipwreck". 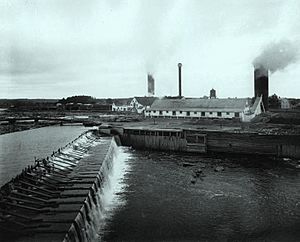 In 1603, Samuel de Champlain visited the area and considered the location as "pleasant enough". In 1616 merchants known as the Rochelais from La Rochelle were the first Europeans to spend the winter. Matane was used as a trading post for the Rochelais who were exchanging European goods for furs with the Mi'kmaq people. In 1672, the land on both sides of the Matane River was granted as a seignory to Mathieu D'Amours, which led to the first settlements shortly after. The Mi'kmaq people lived there until 1845.

After World War II, Matane merchants decided to strengthen their economic and maritime bonds with the North side of the Saint Lawrence River. They ran a service of a regular ferry in 1962. In 1978 a train ferry system was in place.

On September 26, 2001, the neighbouring municipalities of Petit-Matane, Saint-Luc-de-Matane, and Saint-Jérôme-de-Matane were amalgamated into the Town of Matane.

Since Matane is the first step to Gaspé's tourist circuit it receives and accommodates many passing tourists. The old lighthouse of Matane was transformed into a tourist information centre with a panoramic view of its surroundings.

Matane is known for its excellent shrimp. The town is known also for its windmills with Quebec's biggest windfarm. The Matane River is known as the "River-School" in Quebec because so many people learn to fish there. The river itself is 101 km in length and is the only place in Quebec where you can fish in the town square.

A number of people from Matane and the area are well known locally or internationally, including artist Claude Picher and NHL players such as Yves Racine. There are a number of art galleries in Matane that support local talent.

The town is divided in 4 districts that match the former municipalities before amalgamation in 2001:

All content from Kiddle encyclopedia articles (including the article images and facts) can be freely used under Attribution-ShareAlike license, unless stated otherwise. Cite this article:
Matane Facts for Kids. Kiddle Encyclopedia.