Baie-Comeau ( 2021 city population 20,687; CA population 26,643) is a city located approximately 420 km (260 mi) north-east of Quebec City in the Côte-Nord region of the province of Quebec, Canada. It is located on the shores of the Saint Lawrence River near the mouth of the Manicouagan River, and is the seat of Manicouagan Regional County Municipality.

The city is named after the adjacent Comeau Bay, which is named in honour of Napoléon-Alexandre Comeau, a Québécois naturalist.

Baie-Comeau is the birthplace of former Prime Minister of Canada Brian Mulroney.

The oldest part of Baie-Comeau is the area known as Vieux-Poste (Old Post) near the mouth of the Amédée River where in 1889, the Saint-Eugène-de-Manicouagan Mission was founded by Eudists. In 1898, the first sawmill in the Côte-Nord region was built there by the brothers Damase and Henri Jalbert, but it closed in 1907 after their timber stock was swept into the St. Lawrence. In 1916, Route 138 was extended to Saint-Eugène-de-Manicouagan and in 1929, its post office opened with the English name of Comeau Bay (gallicized in 1936).

Baie-Comeau itself (the eastern part of the current town) was founded in 1936 when a paper mill was constructed by Colonel Robert R. McCormick, publisher of the Chicago Tribune. Experiencing remarkable growth, the Town of Baie-Comeau was incorporated the following year. The area continued to see economic development with the establishment of the hydro-electric power stations on the Manicouagan and Outardes Rivers beginning with the Chutes-aux-Outardes Station in 1952, an aluminum smelter in 1958, and grain warehouses (the largest in Canada) in 1959.

In 1950, the village of Saint-Eugène-de-Manicouagan was incorporated as the Municipality of Hauterive. In June 1982, Hauterive was merged into Baie-Comeau, taking effect on January 1, 1983.

Baie-Comeau is the seat of the judicial district of Baie-Comeau.

The population was 25,554 at the 1996 census, declining to 22,402 according to the census of 2006. This decrease in population over the span of a decade is partly explained by the fact that many baby-boomers not born in the city retire then move elsewhere. The absence of university and many college-level courses forces young people to get their education elsewhere; there are few employment opportunities which drives migration to the larger urban areas of Montreal or Quebec City.

Knowledge of official languages from 2016 (multiple answers were possible): 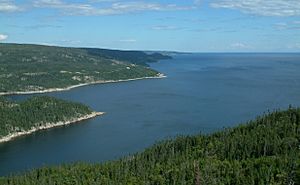 The town is along Route 138 about 100 km (62 mi) east of Forestville and about 230 km (140 mi) west of Sept-Îles. A ferry service and rail ferry service also links the town to Matane on the south shore of the St. Lawrence River. The town is the southern terminus of Route 389, which leads to the Daniel-Johnson Dam, the town of Fermont, and the Labrador region of the province of Newfoundland and Labrador.

Although at the same latitude as Vancouver or Paris, Baie-Comeau has a borderline subarctic climate (Köppen Dfc), a little short of a humid continental climate. The cold Labrador Current makes the Gulf of St. Lawrence very cold and tends to cool the weather during summer much more than the marginal warming of the winters resulting from its maritime location. With the moist northeasterly winds coming in from the Icelandic Low, snowfall is very heavy, averaging around 3.6 metres (141.7 in) per year with a peak depth of around 0.63 metres (24.8 in) in March typical. The extreme snow depth was 2.26 metres (88.98 in) on 10 January 1969.

The region is a major forestry centre for the pulp and paper industry, owned by Abitibi Consolidated as of October 2006. Alongside hydro-electricity and the paper industry, an aluminum plant has fed employment for decades. Cargill has a large elevator there that is used to transfer grain from Great Lakes boats to ocean-going ships. 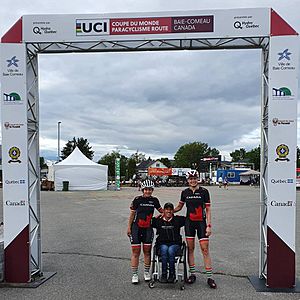 The 1993 Quebec Winter Games were played in Baie-Comeau.

Many different sports are played in Baie-Comeau:

Baie-Comeau is home to the Baie-Comeau Drakkar, an ice hockey team playing in the Quebec Major Junior Hockey League since 1997. The team plays in the Centre Henry-Leonard located in the eastern sector of the town.

The Centre de ski du Mont-Tibasse is an alpine ski centre located a few kilometers north of the town where it offers twelve slopes. Cross-country skiing is also popular. Students often frequent Mont-Tibasse as part of their school programs.

An 18-hole golf course is available in the western sector of the town. It is a semi-private golf club and is open for most of the summer.

Some beaches are also available in the summer. There are other beaches are along the shore of the St. Lawrence river such as the Plage Champlain and the Plage Pointe-Lebel, among others.

Several outdoor tennis courts are available to the public in the different parks across town. They are open for most of the summer.

The Baie-Comeau Vikings represent the Polyvalente des Baies in the Saguenay-Lac-Saint-Jean League. The team won championships in the eastern Quebec circuit in 2003, 2004 and 2006, and were finalists in 2005.

The town is also home to one French-language CEGEP called the Cégep de Baie-Comeau.

All content from Kiddle encyclopedia articles (including the article images and facts) can be freely used under Attribution-ShareAlike license, unless stated otherwise. Cite this article:
Baie-Comeau Facts for Kids. Kiddle Encyclopedia.