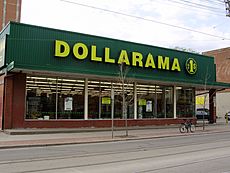 A Dollarama store in the Parkdale neighbourhood of Toronto

Dollarama is a dollar store chain. The chain was created by Larry Rossy in 1992. The first Dollarama was opened at the shopping centre "Les promenades du St-Laurent" in Matane, Quebec in April, 1992.

In November 2004, 80 percent of Dollarama was sold to a private equity fund, Bain Capital, of Boston, Massachusetts for $850 million US.

All content from Kiddle encyclopedia articles (including the article images and facts) can be freely used under Attribution-ShareAlike license, unless stated otherwise. Cite this article:
Dollarama Facts for Kids. Kiddle Encyclopedia.